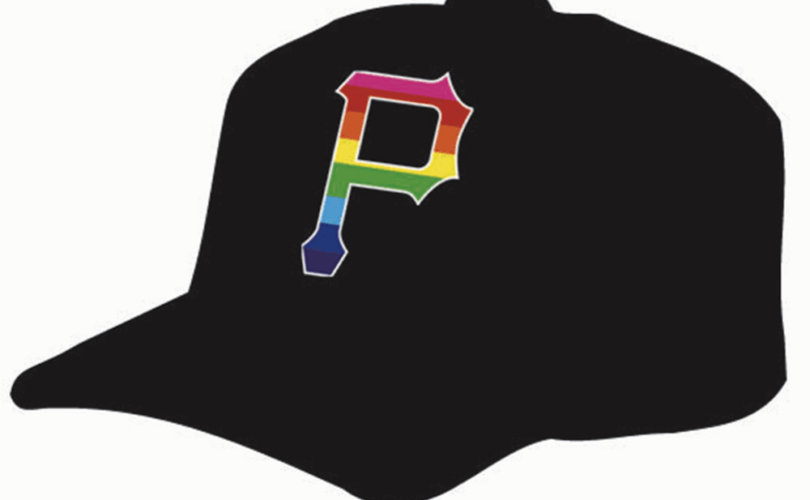 PITTSBURGH, Pennsylvania, June 9, 2017 (LifeSiteNews) —  It seems you can’t even take your kid to a ballgame these days without encountering the ol’ red-orange-yellow-green-blue-and-purple.

The Pride flag will take the place of Old Glory in Pittsburgh’s PNC Park on July 2 when the Pirates’ first-ever Gay Pride Day falls on the weekly Kids’ Day. Each ticket to the Major League Baseball game will include a Pirates Pride Day cap, complete with rainbow-hued “P”.

Mental health awareness advocate Richard Jarzynka has begun a campaign on Facebook to protest the conflation of the two events.

“I have been a Pittsburgh Pirate fan for 50 seasons,” he declared online. That ended the day he found out about the Pirates “Pride” celebration. “As a Christian, I cannot support an organization which actively promotes a behavior which the Word of God repeatedly and unequivocally declares to be a sin,” Jarzynka wrote.

His disappointment stems not only from his long years of fandom but from attending the Pirates’ Faith Night. “I cannot abide the Pirates’ contradiction on these issues. An organization cannot support both homosexuality and the Christian, Jewish or Muslim faiths, which all declare homosexual behavior to be a detestable sin.”

Jarzynka is horrified that kids under age 14 who attend Pride Day/Kids’ Day will receive Jameson Taillon “replica alternate” jerseys. “That’s right,” he wrote. “The Pirates are specifically marketing to draw children to the game at which they will be celebrating and promoting homosexuality.”

In an interview with LifeSiteNews, Jarzynka stated that he wants “to see every LGBT person on earth go to heaven. But as a Christian, I cannot call good that which the Word of God undeniably declares to be a sin. … (Meanwhile) the LGBT Pride celebration is completely out of place on a day when the Pirates are having promotions for children, such as giving away jerseys to kids under 14, inviting kids to run the bases, and having a ’Family Fun Zone’.”

So far, he has received no response from the Pirates, but he hopes Rev. Franklin Graham, son of Billy Graham, will take an interest in the event. Graham spoke out last month against the New England Patriots’ support for a flag football event called the “Gay Bowl.” “I’m disappointed that a great team from such a wonderful area of the country would promote a sinful lifestyle like this. Shame on them, “said Graham.

The official website of the Pittsburgh Pirates lists Tyler Lippard at [email protected] or (412) 325-4912 as the contact for their pride event.