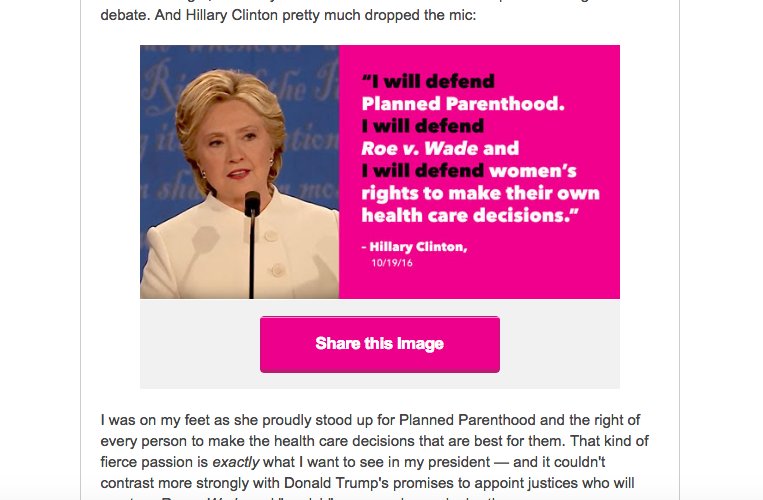 October 20, 2016 (LifeSiteNews) – “I was on my feet” as Hillary Clinton “proudly” defended America’s largest abortion company and the “right” to late-term abortion, the executive vice president of Planned Parenthood told supporters in an email Thursday.

Clinton’s defense of a procedure that consists of delivering nearly all of a living baby except for her head, inserting scissors into the base of her skull, and sucking out her brains was “a real conversation about reproductive rights,” according to Planned Parenthood’s Dawn Laguens.

She “pretty much dropped the mic” by defending Planned Parenthood and abortion up until birth, the email exulted.

“That kind of fierce passion is exactly what I want to see in my president – and it couldn’t contrast more starkly with Donald Trump’s promises to appoint justices who will overturn Roe v. Wade and ‘punish’ women who seek abortions,” wrote Laguens.

Clinton recently celebrated Planned Parenthood’s 100th anniversary. She and her campaign starred in a video produced by the abortion provider.

Planned Parenthood’s 100th anniversary is a celebration of “a century of progress,” Clinton said in the video. “Planned Parenthood, congratulations on your first 100 years. And here’s to 100 more.”

Thank you @HillaryClinton & everyone fighting for autonomy & health for all. 100 years, and we're just getting started. #ActStrong pic.twitter.com/YfyrKkaFRN

Ironically, the video featured a young boy exclaiming, “Happy birthday, Planned Parenthood!” and a young girl saying it is celebrating “a century of inspiring the next generation.”

More like a century of aborting the next generation.