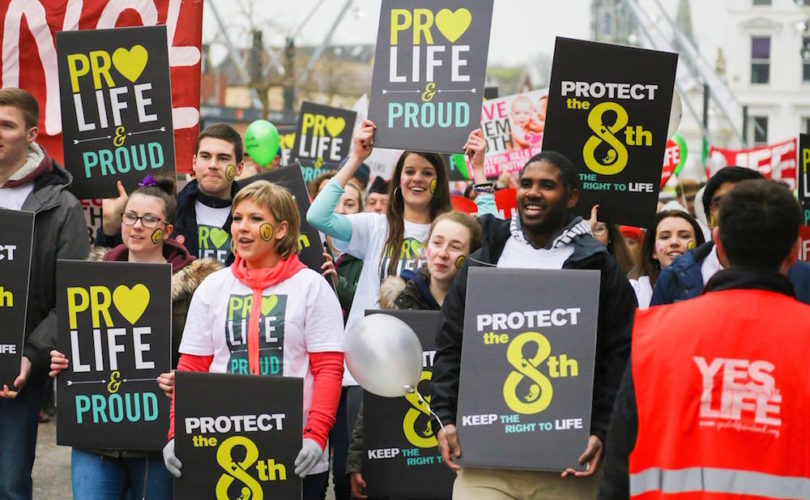 Courtesy of The Life Institute

April 26, 2016 (SPUC-Director) — Statistically an unborn baby in Northern Ireland is safer than anywhere else in the UK. SPUC's success, in union with our sister pro-life groups in Northern Ireland, in preventing the extension of the Abortion Act has meant that the law in Northern Ireland still provides a safeguard for the lives of unborn children as well as protecting women from the terrible damage which abortion can cause.

Two months ago, the Northern Ireland Assembly rejected an attempt to make it lawful to abort children diagnosed with a life limiting condition by 59 votes to 40, and also voted 64 to 30 against an amendment which would have made it lawful to abort those said to have been conceived through criminal sexual activity. There is more unity in Northern Ireland on abortion between people of different faiths than in any other part of the world in which I’ve worked.

However, all of this is now under threat as never before. Please read Liam Gibson's message below to SPUC supporters in Northern Ireland spelling out the very immediate dangers to unborn children.

Unborn lives depend on our prayers and action.

It is no exaggeration to say that, in terms of the right to life of unborn children, this year’s election is probably the most important there has been since the Assembly was established. How you cast your vote could help to decide whether our unborn children will continue to be protected or if abortion will be introduced to Northern Ireland.

The political atmosphere in Northern Ireland is growing increasingly hostile to children before birth. In the last six months alone the attacks on the rights of unborn babies have been on an unprecedented level:

A group of civil servants currently examining the issue of legalising abortion for babies diagnosed before birth with a terminal illness will deliver a report to the health minister later this year. There are very serious concerns over the membership of this group. If, as seems likely, it recommends a change in the law then it will be crucial that there is a majority of solidly pro-life Members of the Legislative Assembly (MLAs) committed to defending the lives of all children.

Sadly both the Sinn Fein and the Alliance parties are now solidly pro-abortion, as are an increasing number of the Ulster Unionists.

Next year sees the fiftieth anniversary of the passage of the (British) Abortion Act 1967. In that time at least 8,400,000 babies in Britain have been killed before they could be born. Until now Northern Ireland has rejected every attempt to introduce similar legislation. The MLAs of the next Assembly will decide whether this continues to be the case.

Election time is the only occasion when politicians can’t ignore what the people have to say.

Please encourage your friends and families to vote only for candidates committed to protecting ALL unborn children, regardless of their disabilities or circumstances of conception.

If you cannot find a candidate you wish to vote for, then mark your ballot with a pro-life slogan, such as ‘Pro-Life Republican’ or ‘Pro-Life Alliance.’ Candidates will be shown spoilt ballots and will see the message

Please ask for prayers at your church for the safe delivery of all unborn babies, especially those in danger of abortion

Finally, on 5 May, please use your vote to speak up for those children who have no voice of their own.