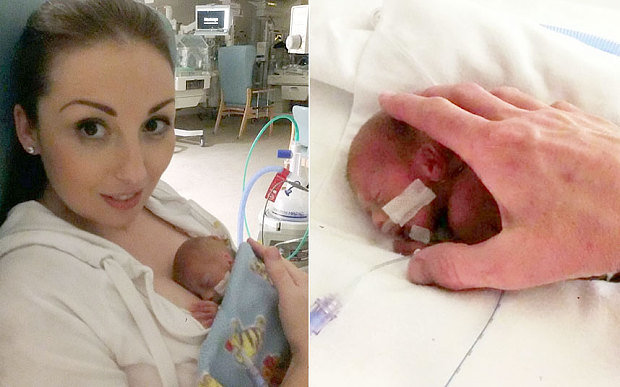 Mhairi Morris with her son Jett, born prematurely at 25 weeks

January 7, 2016 (NationalRighttoLifeNews) — It was a classic case of a pregnant mother told her baby was “non-viable,” who refused to succumb to what she says was pressure by doctors to abort.

Clearly little Jett Morris, who eventually was born prematurely at 25 weeks, wasn’t listening to the gloom and doom scenarios. In spite of all the dire predictions, he has now grown into a healthy one year old, according to Jessica Fleig of the British publication, The Mirror.

Mhairi and Paul Morris say their son, born at just 1.4lbs, would not be here today if they had given in to pressure from medics at East Surrey Hospital. Here’s the narrative, as reported by Fleig.

Just after having an ultrasound scan at 20 weeks, which revealed everything was perfect, Mhairi’s water broke.

“The doctor said ‘we’re going to get you into theatre [operating room]. You have to have a termination because there’s nothing we can do’.”

She added: “I understand doctors have to tell you the worst case scenario and be blunt, but no two people on this Earth are exactly the same and doctors didn’t even give Jett a chance.

“When he came back in and Paul and I had talked we told him I wouldn’t be going into theatre and the doctor looked at his watch and rolled his eyes at me, as if I was wasting time.

It gets worse, according to Mhairi and Paul. They told reporter Fleig that they’d been given just five minutes to make a decision—and that a trolley [a gurney] had actually been wheeled in to take Mhairi to the operating room.

Mhairi had suffered preterm premature rupture of membranes and later was diagnosed with placenta previa – where the placenta forms underneath the baby and can cause bleeding and infection.

Mhairi was told she was likely to go into labour within 48 hours and her baby would die. But a few days later she had not given birth and was allowed to go home.

It was 12 days later when she started bleeding and was rushed back to the hospital. But they soon had to travel to another hospital 80 miles away because East Surrey Hospital was not equipped to handle a baby born before 28 weeks.

According to the family, doctors at Portsmouth Hospital “warned their son could be brain damaged and would probably die at birth because his lungs would not be developed,” Fleig reported.

But Jett defied the odds and came out kicking and wriggling on December 6, 2013 – and even let out a small “squeak” before being rushed to an incubator.

He suffered with chronic lung disease and jaundice – which he quickly recovered from after his lungs and organs developed.

He was finally allowed home on March 5 – almost three weeks before his original due date of March 24.

As noted above, it’s not as if Jett did not face challenges. He also has two small holes in his heart, but “it is not thought they will ever cause a problem for him and he was taken off an oxygen machine in May.” He is one resilient infant.

“We have a happy outcome but I worry that other mothers could have had an abortion when their babies might have survived.

“I was given such a bleak outlook that I kept thinking ‘he’s not supposed to be healthy’ and was waiting for something to happen, but it never did.”

Mhairi said she was forced to Google her options rather than being given them by medics – and now hopes her story will be seen by other pregnant women doing the same thing.

Reprinted with permisison from National Right to Life News.

1
‘Brilliant’ new documentary exposes how Big Pharma and gov’t teamed up to push the COVID vaccines
2
Catholic Identity Conference opens with call to ‘resist’ Pope Francis and the ‘New World Order’
3
Girls at Vermont school banned from changeroom for objecting to presence of ‘transgender’ male student
4
John-Henry Westen: Pope Francis is the chaplain of the New World Order
5
Pope Francis appoints pro-LGBT cardinal as head of culture and education in Roman Curia
Subscribe to Daily Headlines »