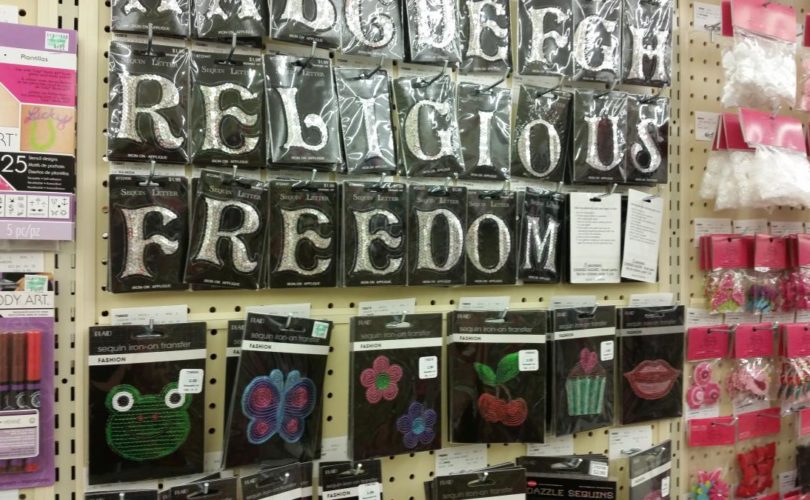 The media adored 29-year-old feminist Jasmine Shea when she spelled “Pro-Choice” and littered condoms throughout craft-store Hobby Lobby, acting out a temper tantrum over the Supreme Court’s new decision – but how will they react to this?

Staff at the Media Research Center's Culture and Media Institute (CMI) visited a Hobby Lobby on July 14 to rearrange craft letters to read “Religious Freedom” and “First Amendment.” Unlike the media’s new celebrities, we placed the letters back into their original spots after the photos (also note: no condoms). Pictures Below:

On June 30, the Supreme Court ruled that for-profit company owners with religious objections to providing employee coverage of abortion-inducing drugs could be excluded from the Obamacare Contraceptive Mandate. The media have been fuming ever since.

Including The Washington Post, Jezebel, Feministing and Bitch Magazine, the media happily hyped Shea’s message – some even providing a Hobby Lobby store locater so that readers could participate in the trend.

And a trend it is. Liberal ThinkProgress Editor Adam Nathaniel Peck also visited a Hobby Lobby to brush up on his spelling by rearranging blocks into: “All women deserve birth control.” His actions garnered a PolicyMic feature story.

But, as CMI staff discovered, Hobby Lobby’s refusal to provide certain drugs in the name of religious freedom is clear: the store boasted Christian crafts in almost every aisle – in addition to closing on Sundays.