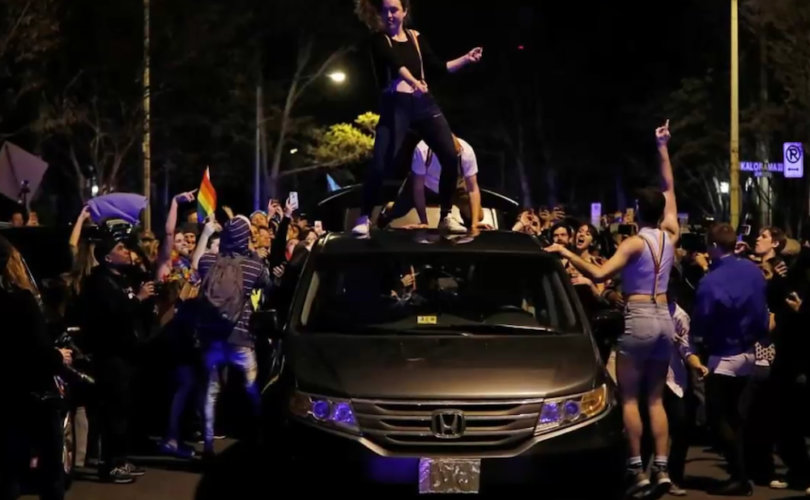 April 5, 2017 (LifeSiteNews) — Homosexual and environmental activists held a “Queer Dance Party” protest march Saturday night that ended at the Washington, D.C. home of Ivanka Trump, the president’s daughter, and her husband, Jared Kushner, in what is apparently becoming a new mode of left-wing protest.

A similar “queer dance party” protest was held in January against then-Vice President-elect Mike Pence near his temporary rental home in the District before he moved to the vice presidential mansion after the inauguration.

Activists walked and gyrated down the street, with one fellow who appeared to be a leader writhing as if to show off how flexible his body has become, hopefully from dancing. It seems, based on videos of both events, that this is the same twerking fellow (rainbow-colored suspenders) who led the anti-Pence “dance party.”

“We will meet at Dupont Circle (in the actual circle) and parade down Connecticut Ave. to Rexi [Secretary of State Rex Tillerson, whose home is next door] and Ivanka-poo’s neighborhood to send the clear message that our climate and our communities matter,” said a Facebook announcement for the “dance party.”

The event was organized by “Queer Resistance,” WERK for Peace, and Trans Women of Color Collective. “Queer Resistance” specializes in demonstrating “unity against our oppressors,” WERK for Peace is a “queer-based grassroots movement” formed after the 2016 terror attack on the homosexual nightclub in Orlando, and Trans Women of Color Collective is, needless to say, “building towards the collective liberation of all people.”

Now here’s the thing: To this day, most secular media barely report on the massive annual March For Life marking the Supreme Court decision that resulted in the systematic slaughter of innocent, unborn children. And yet these radical “dance parties” with a few hundred taking part get all sorts of favorable coverage from the Washington media.

There is a synergy between the media and the political Left that social conservatives will never be able to match. That produces a natural bias in coverage that rewards everything the Left does against Trump, including indecent and bawdy protests at a VIP’s home — a tactic few conservatives would even consider much less carry out.

Another curious aspect to the “queer dance party” protest is that it targeted Ivanka, who was widely reported to be responsible for using her special influence to stop a pro-religious-liberty executive order from the White House that conservatives have been expecting.

Ivanka and her husband are pro-homosexual advocates, which is strange for a couple practicing Orthodox Judaism. Perhaps these libidinous and uncivil protests will help them see the light that the LGBTQ lobby (Q is for Queer) is more about legitimizing sin than defending “civil rights.”