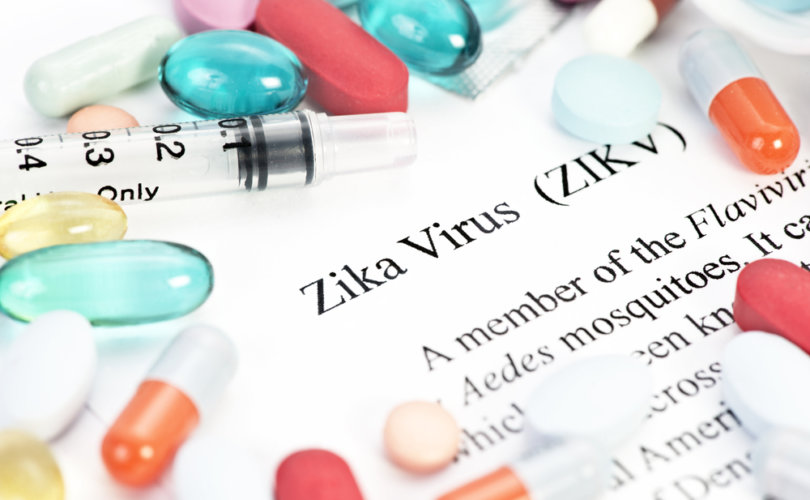 September 6, 2016 (LiveActionNews) — Fears of the Zika virus have grown as infection rates have spread. While Zika causes only minor symptoms in adults, it is believed to cause birth defects in preborn babies when their mothers are infected, most notably, microcephaly. The abortion industry has capitalized on this fear, trying to promote abortion as some kind of sick “cure” for the virus. Of course, all abortion does is kill preborn children; it’s not a cure for Zika in any way. Scientists have been busily working on a cure, though. And researchers in Florida have just made a major breakthrough.

A team composed of scientists from Florida State University, the National Institutes of Health, and Johns Hopkins University discovered two already existing drug compounds that can stop Zika from replicating, and can also prevent it from damaging the brain cells of preborn babies — and therefore, prevent potential birth defects.

One of the drugs is already approved by the U.S. Food and Drug Administration, and could theoretically be prescribed by a doctor today. Nicolsamide is currently used to treat tapeworm, but researchers found that it could also be used to treat Zika, and shows no risk to pregnant women in preliminary studies. More tests are needed to determine what the best regimen would be, but it’s a beacon of hope for women who live in high-risk areas. FSU Professor of Biological Science Hengli Tang explained that the rapid spread of the disease pushed them to find a treatment quickly. “We focused on compounds that have the shortest path to clinical use. This is a first step toward a therapeutic that can stop transmission of this disease,” he said. “It’s so dramatic and irreversible,” he continued. “The probability of Zika-induced microcephaly occurring doesn’t appear to be that high, but when it does, the damage is horrible.”

Johns Hopkins Professors Guo-Li Ming and Hongjun Song, along with National Institutes of Health scientist Wei Zheng, worked with Tang to screen over 6,000 drug compounds that were either already approved by the FDA or were already in the process of a clinical trial, in the hopes of finding a treatment available quickly. The team originally came together because Tang, a virologist, had access to the virus while Song and Ming, who are neurologists, had access to cortical stem cells. They traveled back and forth between laboratories in Baltimore and in Tallahassee, infecting the cells with the virus and then working to see if the existing drug compounds would work as a cure. “It takes years if not decades to develop a new drug,” Song said. “In this sort of global health emergency, we don’t have time. So instead of using new drugs, we chose to screen existing drugs. In this way, we hope to create a therapy much more quickly.” The next step is beginning to test the compounds on animals infected with Zika.

If these treatments are successful, it will an incredible relief for women everywhere, who now won’t have to fear that their babies might be born with birth defects from Zika. And it also will mean that they won’t have to face the agonizing choice of having an abortion. Whether or not the abortion industry will celebrate this breakthrough… well, that’s anyone’s guess.