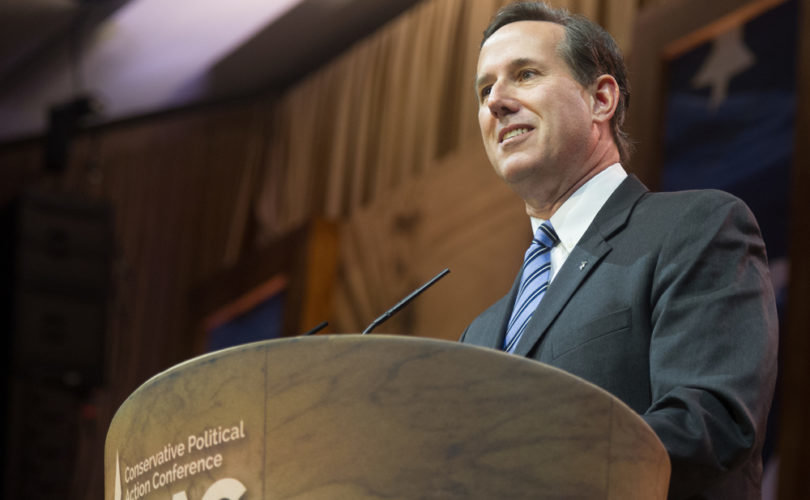 Former senator and presidential contender Rick Santorum has a theory about why supporters of true marriage are losing ground in the fight against marital redefinition – increasingly, they’re being banned from the debate entirely.

“The arguments are being won among young people,” Santorum, a Republican, told Tony Perkins of the Family Research Council in a recent interview.  “We are losing in this particular area among young people not because we’re out there and competing, it’s because they have effectively silenced the church on a lot of those issues and young people don’t even know what the opposing view is on these issues.”

“I really believe in this subject matter at hand with the gay community that a Judeo-Christian worldview cannot survive with a worldview that is as rabidly secular as this movement is,” Santorum continued.  “One is going to battle the other and I can tell you that the statists, these secular statists, do not want the competition that comes from the church and so they are going to do everything they can to marginalize them, to force them out of the public square to be quiet.”

“They’re going to use, as they have, the Johnson amendment, try to use the IRS and the tax code to do so, they’re going to use every lever of power the government has to keep this competition of ideas silent so they can win the argument,” he added.

Unfortunately, Santorum isn’t paranoid.  The IRS really has been abusing its power to silence traditional views on marriage, life, and family.

During the 2012 elections, an IRS official leaked confidential donor lists belonging to the National Organization for Marriage (NOM) to homosexual activists and left-leaning media outlets in an attempt to embarrass Republican nominee Mitt Romney, who had given $10,000 to the group.  The IRS has also targeted other pro-family and pro-life groups for harassment, setting off a scandal which led to the head of the agency’s tax-exempt organizations department being held in contempt of Congress and taking an early retirement.  And in July, the tax agency said it would monitor church sermons for political content heading into the 2014 campaign season.

The IRS isn’t the only tool progressives are using to silence opposition from the faithful.  For an impressive (or, you know, terrifying) list of the Obama administration’s direct attacks on religious freedom, check out this helpful guide from Alliance Defending Freedom here (PDF).