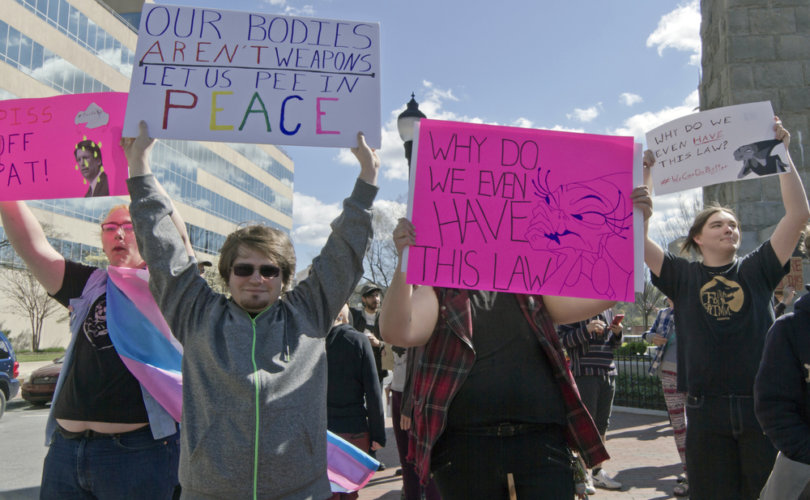 SAN FRANCISCO, September 30, 2016 (LifeSiteNews) — For anyone who still believes that hopping on the homosexual bandwagon is all about being “tolerant, diverse, and inclusive,” well, here’s something that will likely pop your bubble.

Earlier this week, San Francisco became the first city in the U.S. to not only prohibit its employees from using public dollars to travel to states with laws defending religious freedom and respecting biological differences when it comes to public bathrooms and change rooms but to bar city contracts with businesses headquartered in those states.

“This legislation will make San Francisco the first city in the country to ban city contracting and spending in states that adopt anti-LGBT laws,” said District 8 Supervisor Scott Wiener, who sponsored the bill. He added: “This will put San Francisco on the cutting edge of advocating for full equality and acceptance of issues important to LGBT.”

Of course, this bill, which must be read a second time before becoming law, directly targets North Carolina for its recent law protecting religious freedom. The bill’s sponsor confirmed as much.

San Francisco Mayor Ed Lee in March forbade city workers from traveling to North Carolina for any nonessential city business, after its Governor Pat McCrory signed a law barring transgender people from using bathrooms that correspond with their gender identity rather than their gender at birth.

“This legislation codifies the ban and expands the ban to include spending in these states,” Wiener said. “This will have a strong message that San Francisco stands firmly with our LGBT community around the country.”

And there you have it, folks. Where is the “tolerance” championed by the gay lobby for so many years? Where is the diversity of views and the inclusivity? Gone, gone, and gone.

The movement’s true face is utterly revealed here. And it looks rather hideous.

What we see happening here is the calculated imposition of a radical sexual ideology that brooks no dissent. While pushing the creed of equality and diversity, the movement attacks individuals such as bakers, wedding photographers, florists, professors, counselors, and health care workers in an effort to achieve total adherence. Now we see the movement attacking entire states.

And the pushers and backers of the gay agenda just love quashing anyone who stands up for reason, common sense, and God’s own truth when it comes to marriage, sexuality, and the human binary of male and female. Again, the bill’s sponsor states as much.

The new San Francisco ordinance, which the city's 11-member board of supervisors unanimously approved Tuesday, bars city-funded travel to states that have enacted laws reversing protections for LGBT individuals since June 25, 2015, when the Supreme Court ruled in favor of same-sex marriage.

“We've achieved some huge victories around marriage equality in recent years,” Wiener said earlier this week at a San Fran board meeting. “Now we're seeing a backlash in laws, for example, enabling local business to discriminate against LGBT people.”

Yes, Wiener certainly is seeing a backlash, and he and his LGBT-activist comrades are going to do all they can to stop it, to squish it, to end any voice that opposes their vision of reality.

But they cannot win in the long run. Unforgiving nature cannot allow the entire sexual sphere to be turned upside-down willy-nilly without dramatic consequences for those who do so. LGBT activists can pass whatever laws or ordinances they want. But these will never change the facts that sexuality is ordered toward procreation, it takes a man and a woman to have a child, and human beings are divided between males and females. Anyone who tampers with these truths does so at his own peril.