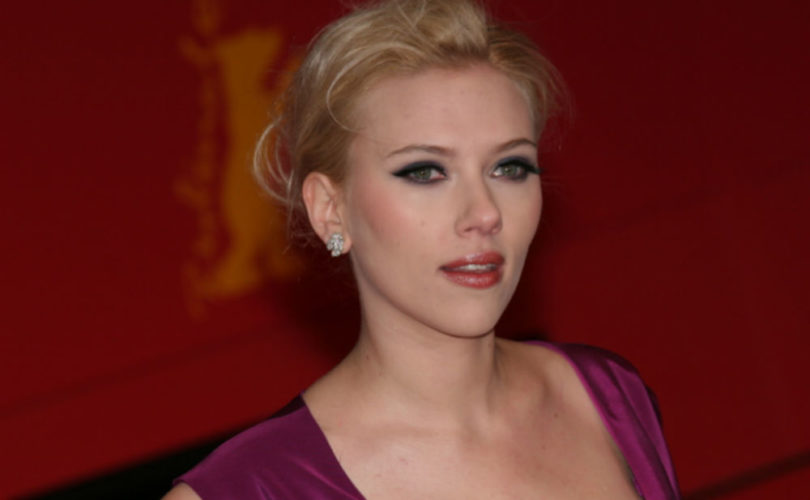 Despite my esteemed background in high school drama (I starred in several productions), I don’t critique acting, except over the water cooler. I don’t have a clue what it takes to make a movie, let alone make a movie well. I assume Scarlett Johansson does, as she’s made a number of them. But clearly, Ms. Johansson doesn’t do so well with logic.

Ms. Johansson has designed t-shirts for Planned Parenthood. The hot pink t’s feature a cartoon male on the front, along with “Hey Politicians! The 1950s called…”; the back reads, “They want their sexism back!” Ms. Johansson stated her reason for wanting to be part of this project:

When I heard that some politicians were cheering the Supreme Court’s decision to give bosses the right to interfere in our access to birth control, I thought I had woken up in another decade,” explained Johansson in a statement.

“Like many of my friends, I was appalled by the thought of men taking away women’s ability to make our own personal health care decisions,” she added.

Oh. Dear. I don’t like men or anyone else taking away my ability to make decisions about my health care either, so I guess we have that in common. That’s about as far as it goes. Ms. Johansson: What men? Where? How are they doing this? Is this some vast right-wing conspiracy?

The last time I checked, pretty much anybody can walk into any drugstore in America and plunk down cash for condoms or Plan B. Most large pharmacies sell a month’s supply of birth control pills for about ten bucks. And Planned Parenthood keeps telling us they’ll give birth control to anyone who asks. There are no men stopping anyone from buying these items. (Also, just so we are crystal clear: abstinence costs nothing.)

Ms. Johansson seems to believe that if an employer does not pay for something, you can’t have it. That, my dear, is faulty logic. While I understand that in Hollywood, there are many perks that come with the job of acting (for instance, the swag bag for the 2014 Emmy Awards included a luxury hotel spa treatment, a $600 smart phone, and jewelry, along with other goodies), a boss can offer his or her employees whatever perks and salary he or she wishes. The employee can then accept the job or not. However, if the boss does not offer employees a company car, for instance, that does not mean you can’t get a car. It just means you’ll have to buy one yourself.

And this is not sexism, Ms. Johansson. It is business and ethics. A boss may not be able to afford to buy all of her employees a car, so she doesn’t do so. A boss may choose not to offer health insurance that pays for abortions, because it violates her conscience. In neither instance do you lose your ability to get those things. And frankly, claiming that it is sexism makes women sound a wee bit weak and whiny (“But, but, how will I ever get birth control pills now??”)

Ms. Johansson, we women are better than this.