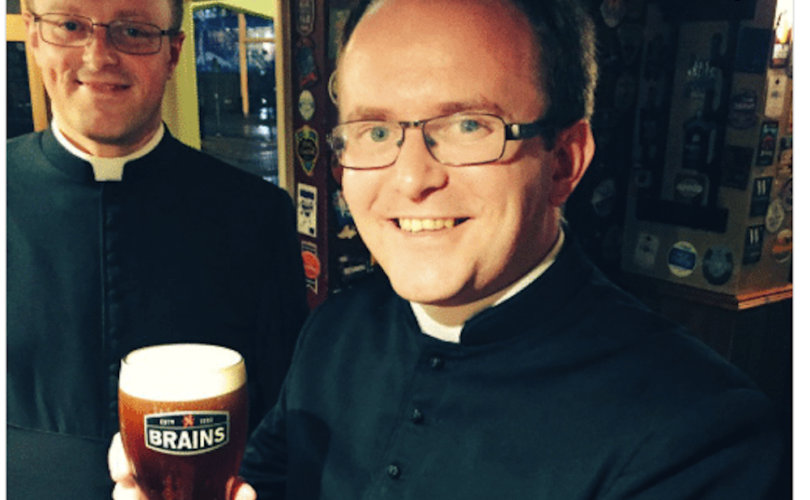 The Rev. Robert James enjoys Brains’ The Rev. James beer at a pub.

CARDIFF, Wales, August 2, 2017 (LifeSiteNews) — British Catholics are giggling at the tale of seven seminarians who went to a Welsh pub after an ordination and were mistaken for a bachelor party.

Thanks to the out-of-control antics of contemporary bachelor and bachelorette parties, many British pubs now bar parties of men and of women wearing funny costumes from entering. Cardiff’s “The City Arms” is clearly a safe place to go for a quiet pint, for the barman took one look at the seven men dressed like vicars and said something along the lines of “Sorry, gents, we don’t do fancy dress or stag do’s.”

The Catholic seminarians, who included temporary deacons, tried to convince the unbending beer-slinger that these were their regular clothes before giving up and heading, still thirsty, for the door. There they found faith in the form of a man they presumed to be the manager. He sent them up to the bar for a free pint, and the men received a round of applause from the other customers.

The ensuing hilarity was heightened by the revelation that one of the temporary deacons rejoices in the name of “the Reverend James.” The Rev. James is also the name of a Welsh beer, and its namesake bought the blushing barman a pint of it as a gesture of goodwill.

A spokesperson posting on the archdiocesan website said the Archdiocese of Cardiff would like to thank The City Arms for being good sports through all of this and for their kind gesture to our seminarians – and please note a number of our clergy, including the Archbishop of Cardiff, frequent your bar so don’t turf any more out please!”

A quick check of statistics suggests a reason for the barman’s doubt: less than 3 percent of the Wales population is Roman Catholic.