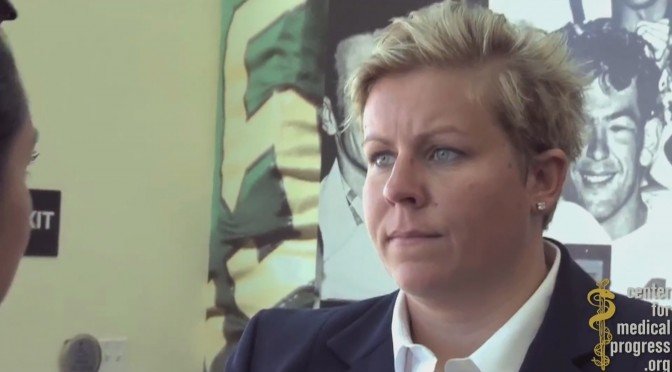 Aug. 25, 2015 (LiveActionNews) – Ever think of starting a business? Cate Dyer did. She’s the CEO of StemExpress, a company that (until recently) worked with Planned Parenthood to supply researchers with tissue from aborted children.

It’s pretty lucrative, although there are some challenges. Apparently neural tissue is “the hardest thing” to transport because “it’s insanely fragile.” The solution? Just ship the whole head. Dyer talks about all that and more on the Center for Medical Progress’s upcoming release.

The Center for Medical Progress (CMP) has put out a series of undercover videos that recorded meetings between Planned Parenthood officials and people claiming to be fetal tissue buyers. The officials are shown trying to profit from organ sales, offering to illegally alter how abortions are performed, and admitting to partial-birth abortions.

Other videos featured StemExpress CEO Cate Dyer, but their release was blocked by a temporary restraining order – until now.

CMP has assembled a trailer you can watch below.

One of the things discussed is how difficult brain matter is to ship:

As you probably know, one of the issues with neural tissue, it’s so fragile. It’s insanely fragile. And I don’t even know—I was gonna say, I know we get requests for neural, it’s the hardest thing in the world to ship.

The potential buyer suggests sending an entire head, and Dyer concedes this is a good idea. However, there can be problems when the package is delivered: “They’ll open the box… ‘Oh God!’” According to her, “lab techs freak out and have meltdowns,” so it’s important to “tell the lab it’s coming.” When the buyer says to “make sure the eyes are closed,” Dyer laughingly agrees.

This isn’t the first revelation about StemExpress. In an earlier video, former StemExpress employee Holly O’Donnell recounted being told to cut into the head of an aborted baby whose heart was still beating.

There’s a legal term for killing an infant after birth; it’s called murder. And in this case, it’s federally subsidized: every year, Planned Parenthood receives over half a billion tax dollars. While pro-lifers tried last month to redirect that money to community health centers, they were opposed by Senate Democrats and the White House.

If you want that to change, sign Live Action’s petition calling for an end to Planned Parenthood’s funding. You can also also contact Colorado’s Attorney General, Cynthia Coffman, and ask for a homicide investigation at Planned Parenthood of the Rocky Mountains.

Because while there are challenges that come with trafficking dead children, Cate Dyer and her friends at Planned Parenthood seem pretty good at overcoming them; it’s time they had bigger problems to worry about.