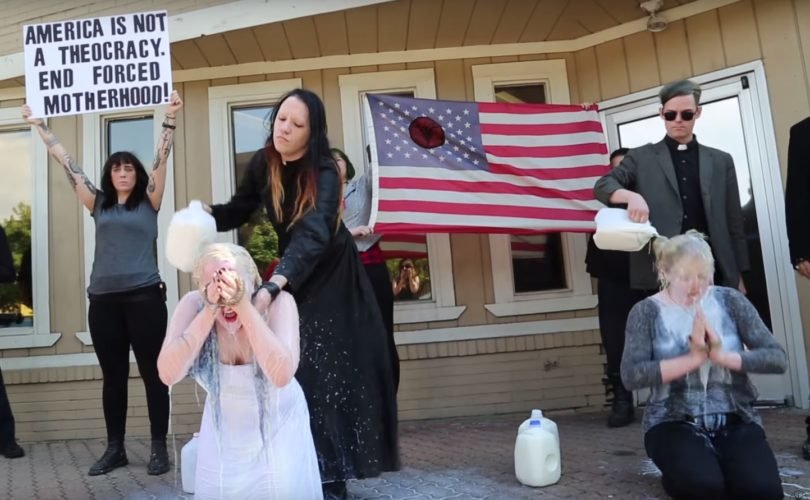 Bragging about their encounter with pro-lifers on their website, the Satanists wrote:

The Satanic Temple of Detroit interrupted the pro-life national day of protest against Planned Parenthood at the Detroit and Ferndale, Michigan locations. The Temple employed radical political theater to illustrate the theocratic agenda imposed upon female bodies.

Two women knelt as if in prayer and were then drowned in milk by men dressed as clergy.  One protestor displayed a sign reading: “AMERICA IS NOT A THEOCRACY. END FORCED MOTHERHOOD.”

(1) One’s body is inviolable, subject to one’s own will alone.

(2) Beliefs should conform to our best scientific understanding of the world. We should take care never to distort scientific facts to fit our beliefs.

The Satanic support of Planned Parenthood comes on the heels of the seventh Center for Medical Progress video showing a former StemExpress employee recounting how she was asked to cut through the face of a baby whose heart was still beating in order to procure the child’s brain tissue at a Planned Parenthood facility. The Detroit group stated of the nationwide pro-life protest:

The August 22nd protest was directly intended to irresponsibly perpetuate this contrived story in an attempt to leverage misunderstanding for political gain and impose the moral opinions of some upon a diverse community.

Video footage shows the devil worshipers displaying the US Flag with the Satanist symbol in the center and reciting a mocking chant of, “Hail Mary, full of grace.”

The group called their counter protest a form of worship, stating:

We will not remain voiceless when the philosophical and religious opinions of those in power are utilized to legislate morality…. Satan is representative of the eternal rebel, enlightened inquiry and personal freedom. We consider our action a form of worship.

Despite their best efforts, abortion radicals were unable to squelch the commitment of pro-lifers across the nation. Opposition to the abortion giant reached record numbers.