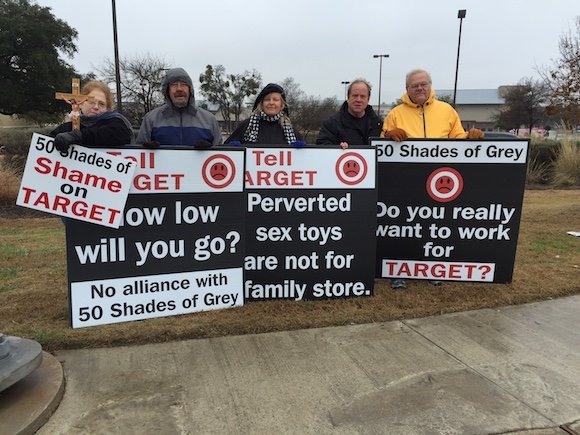 How many demonstrators does it take to make Target buckle in Georgetown, Texas, and beyond? “I’m not sure,” says Dr. John Pisciotta. “But apparently seven was adequate on Monday.”

History is a great predictor of the future. Dr. Pisciotta has a successful history of curbing abortion and immoral sex education in his community through his undying opposition to Planned Parenthood. So it is only natural that he would step up to oppose the moral decay that Target is bringing to communities through its Fifty Shades of Grey sex toy merchandise. Dr. Pisciotta heads American Life League Associate Group Pro-Life Waco.

Georgetown Target management buckled after a 75-minute demonstration outside its retail store on Monday and took down its Fifty Shades of Grey merchandise display. And there is more. Store management informed the demonstrators that the regional manager had ordered all stores in the region to stop selling the merchandise.

“It was not clear whether the retrenchment went farther than the Target district including Georgetown,” Dr. Pisciotta said. “I am sure the rumble in Georgetown had the attention of management at Target headquarters in Minneapolis.”

Austin’s KTBC Fox 7 arrived on the scene almost as soon as the demonstrators set up, shooting footage of the signs and interviewing the folks who were demonstrating. Segments aired on the Austin Fox News affiliate Monday evening.

As the seven demonstrators stood in the cold rain with their signs, passing motorists honked and gave thumbs up, with some stopping to thank them. Dr. Pisciotta reported that the only negative reaction came from the store manager, who called police in an attempt to have the demonstrators removed. They left on their own following the discovery that the display and merchandise had in fact been removed.

“The demonstration is dedicated to all the great moms and dads trying to raise their children along wholesome paths in a culture that is hostile to their values,” Pisciotta told STOPP. “Hopefully Target and other stores will think twice before entering into such a pernicious marketing stunt,” he said.

The Georgetown success demonstrates how easy it can be to make a huge difference in your community and beyond. American Life League joins in the call to action to step up opposition across the nation.

“Tomorrow, check the Target store near you and see if it has the Fifty Shades of Grey sex display in the pharmacy area,” Dr. Pisciotta advises. “If it does, get some friends and draw up some signs. Demonstrate at a Target street entrance for an hour or two.”

You can also contact Target’s corporate headquarters in Minneapolis to complain about the Fifty Shades of Grey merchandise in Target stores, telling them to expect more demonstrations if the merchandise is not removed. Contact the corporate office via phone at 800-440-0680 or contact online at help.target.com/help/ContactUs?Con=ContactUs.