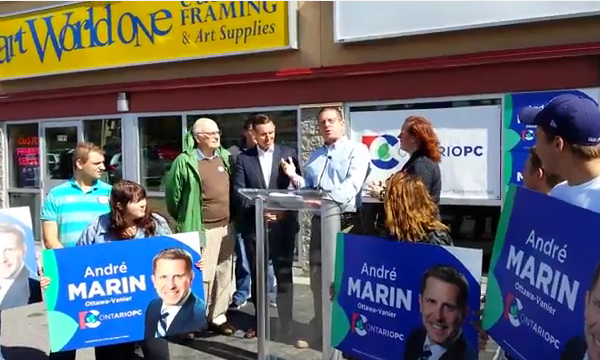 PC Candidate, Andre Marin declared that social conservatives need to be put in their place by PC leader Patrick Brown, as they constitute a threat to the party.

November 24, 2016 (Campaign Life Coalition) – Thursday November 17th saw Ontarians in the Niagara region elect the youngest MPP ever to sit in the Ontario Legislature. At the same time, in an Ottawa-area riding, PC candidate Andre Marin was complaining about his by-election loss to Liberal candidate Nathalie Des Rosiers, pointing fingers at the grassroots membership of his own Party.

The Ottawa Citizen reported that Marin “declared that social conservatives need to be put “in their place” by PC leader Patrick Brown, as they constitute “a threat to the party”. Since then, in various radio interviews, he has continued his blame-game against Ontarians with whom he doesn’t agree.

The truth is, the Ottawa-Vanier PC candidate, didn’t lose to social conservatives. He lost to the Liberals. That’s because when you run as a liberal-lite conservative, most Ontarians who lean that way would rather vote for the real thing than a pretender, while real conservatives just lose interest.

Instead of whining about his loss and blaming social conservatives, perhaps he should take notes from Sam Oosterhof in Niagara West—Glanbrook or Raymond Cho in Scarborough-Rouge River who both secured their seats at Queen’s Park with the help of so-con votes.

Mr. Marin, with all due respect, just know that every time you proclaim that social conservatives need to be put ‘in their place’, you’re attacking a large part of the PC membership. So-cons make up at least 40% of the PC Party’s base, they have one of the highest voter-turnouts among all other groups, and their level of engagement is better than most.

Secondly, you can stop being a mouthpiece for the PC Leader. Everyone knows by now, that if you uphold traditional family values and respect all human life, Patrick Brown doesn’t want you in the party. What you and Brown both fail to understand is that social conservatives have been in the party long before they helped choose him as leader (before his flip-flop on a flip-flop) and they will remain in the party long after he’s gone.