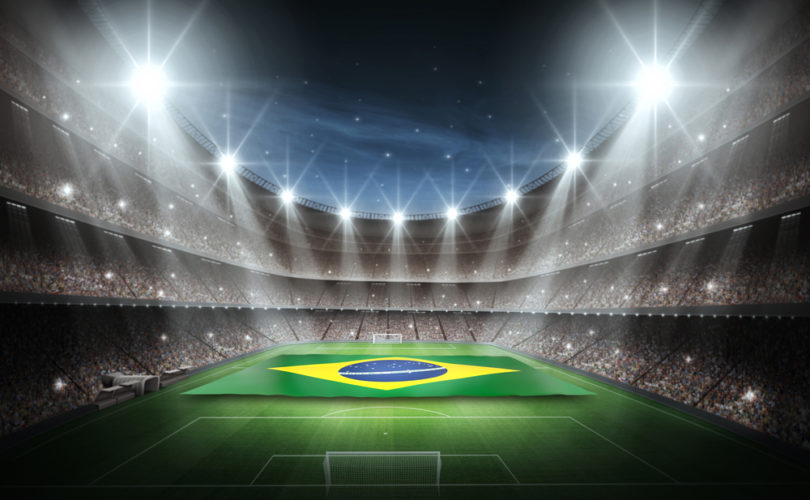 Did you watch the U.S. v. Portugal game last night? Did you cheer for the amazing play of American keeper Tim Howard? Did you howl in disbelief at the last minute goal by Portugal? Even if you’re not a soccer fan, it’s hard not to get swept up in the fun and rivalry of the world’s biggest soccer extravaganza.

Unless you’re a victim of human trafficking.

Every large sporting event in the world has become a red-light district. Where there are many people, there are many people who are willing to buy sex. And that means human trafficking. In December, Time noted that while the nation of Brazil (currently hosting the World Cup) has an age of consent of 14, a recent court ruling allowed that sex with a 12-year-old did not necessarily constitute statutory rape, setting the stage for human trafficking to thrive during one of the world’s largest sporting events. This is not to say that the illegal sex trade doesn’t already have a place in Brazil, as Time reported:

Thiago, 27, has worked as a pimp and trafficker across Brazil, convincing the mothers of girls like Amanda and Emmanuelle to hand over their daughters for some $5,000 to $10,000. “I sought the girls in Recife because there is so much poverty there,” he says in São Paulo, asking that his last name not be published. “It makes it way easier to convince the girls to come down and prostitute themselves.”

In São Paulo, underage girls would earn much more than they do on Recife’s streets. Clients would be charged some $60 for sex; the prostitute would take about half of that, minus debt for clothes, drugs, alcohol and cosmetics. “Realistically, the girl would get about a quarter of what the client paid,” says Thiago, who admits enjoying underage girls himself. “Alcohol and drugs would help the girls to deal with everything. They wouldn’t feel anything anymore. They’d just be objects.”

Brazil has spent more than $3 million to combat human trafficking during the World Cup, but the problem is endemic.

Prostitution is legal in Brazil for anyone over the age of 18, but many of these children — some as young as 10 — are accepting as little as fifty cents for sex.

“These girls come from extreme poverty, a culture of social exclusion and tradition of profound disrespect for women,” Antonia Lima Sousa, a state prosecutor, told CNN.

As with many cases of human trafficking, poverty is at the root of the problem. Children are forced into prostitution by desperate parents, others “choose” the sex trade in order to have food and shelter. There are groups that work with human trafficking survivors, such as the Catholic Sisters of Redemption and Vira Vida. Sister Maria of the Sisters of Redemption spoke of their work:

Sister Maria says that last June during the Confederations Cup, a kind of dry run for the World Cup, underage prostitutes and street children were swept up by police and taken to a shelter outside of town. But after the tournament was over, they were turned loose. Police refused to speak with CNN for this report.

“They aren’t worried about these children growing up in a healthy environment, with jobs and housing, health and education,” she says. “They’re worried about hiding them.”

World sporting events should be joyful occasions: splendid shows of human courage and athleticism, the coming together of nations to share in healthy endeavors and the ability of both athletes and fans to enjoy vigorous rivalries and common human bonds. Until the nations of the world decide to crack down on traffickers and those who purchase the “services” of those being trafficked, our sporting events will always be played under a dark cloud of victimization and violation.