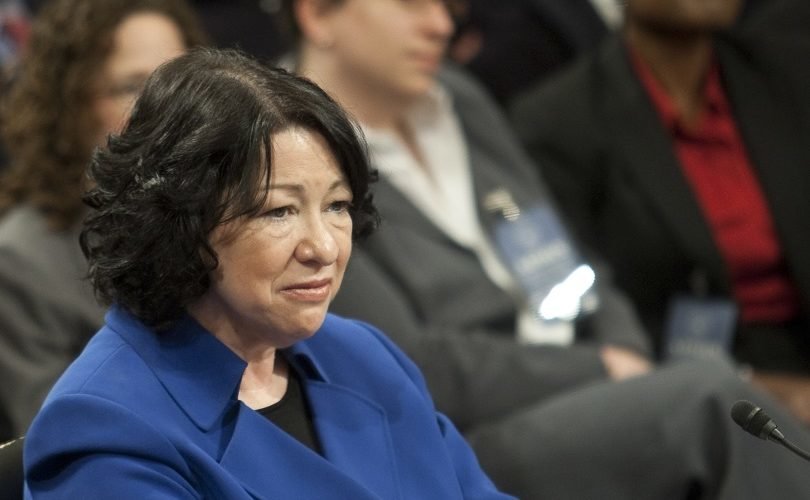 One moment in the Supreme Court's oral arguments over same-sex “marriage” reveals what an embarrassment Sonia Sotomayor is as a justice.

John J. Bursch, who argued on behalf of marriage, said that the people, not five unelected justices, should be able to decide whether to redefine a pillar of society that predates the government and written history.

“This case isn't about how to define marriage,” he said. “It's about who gets to decide that question. Is it the people acting through the democratic process, or is it the federal courts? And we're asking you to affirm every individual's fundamental liberty interest in deciding the meaning of marriage.”

The “wise Latina” immediately interrupted him with the following non-sequitur:

“I'm sorry. Nobody is taking that [liberty] away from anybody. Every single individual in this society chooses, if they can, their sexual orientation, or who to marry or not marry. I suspect even with us giving gays rights to marry that there's some gay people who will choose not to.”

I'll pass over Sotomayor saying that “every single individual..chooses” his or her sexual preference. But don't miss the full illuminating brilliance of her argument: The Supreme Court is not trampling on the right of 50 million people in 35 states to settle their own law as long as straight people are not forced to “marry” homosexuals.

For Sotomayor, apparently anything short of judicially mandated sodomy is within the justices' constitutional prerogatives – a view that would surprise any of our nation's founding jurists, whether Jeffersonian or Hamiltonian.

This would be a laugh line if the Left didn't keep saying it with a straight face. (No pun intended.) The Obama administration made a similar argument about the HHS mandate. In February 2012, then-HHS Secretary Kathleen Sebelius said that the conscience-destroying provision of ObamaCare strongly upheld individual freedom. “It's important to note that our rule has no effect on the longstanding conscience clause protections for providers, which allow a Catholic doctor, for example, to refuse to write a prescription for contraception. Nor does it affect an individual woman's freedom to decide not to use birth control.” (Emphasis added.)