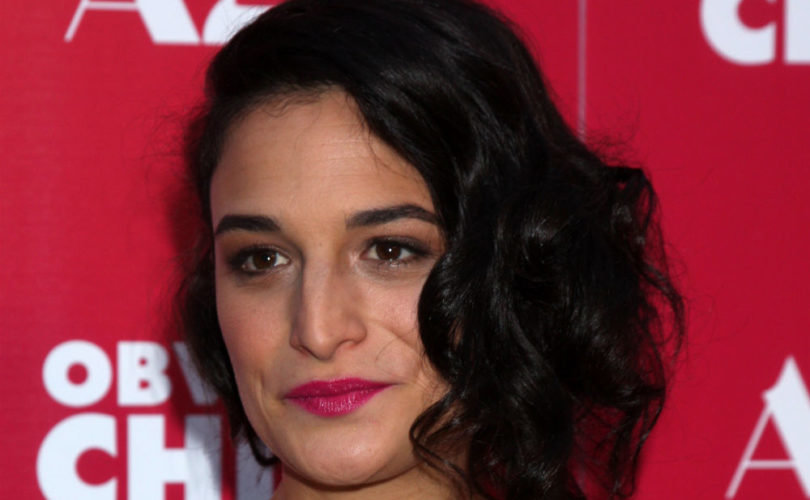 As commenter Christina noted on Facebook (a line I stole on Twitter), “Let’s make abortion the central theme of a comedy, then pretend we’re not trivializing it and trying to make it funny.”

But that’s exactly what the star of a romantic comedy about abortion is trying to say.

But the movie’s star, Jenny Slate (pictured above in a scene from the movie), doesn’t like that portrayal:

“Ugh, that is such a bummer, that term. An abortion romcom – that’s not a thing!” Slate says with an eye-roll. “The movie isn’t saying that abortions are funny. It’s saying that people are funny.”

That’s not what Slate’s comedic pal Jimmy Fallon thought when complimenting her on the picture. “It’s getting great reviews because it’s a serious issue, but you make it lighthearted, you make it funny,” said Fallon, as quoted by NewsBusters.

And Slate kept her thoughts to herself when Obvious Child was being plugged by Planned Parenthood CEO Cecile Richards:

This is a hilarious and honest story about one young woman trying to figure out life and dating, and it includes an unapologetic look at her decision to have an abortion….

It shows her as a full and complete person making the serious decision to end a pregnancy and still having a full and fun life.

Or when the Los Angeles Times was giving Obvious Child rave reviews as “finally, a romantic comedy about abortion.”

If this wasn’t a rom-com about abortion, why all the advance screenings for the abortion industry? Why was Planned Parenthood consulted in the making of the film, “vetting the script and allowing them to shoot in a clinic”? quoting Mother Jones.

But Slate and director Gillian Robespierre apparently no longer need abortion zealots to help them sell their movie. That or they have found abortion advocates are really no help at all – perhaps radioactive even?

Whatever, they’re now shunning the “abortion rom-com” label, to which I tweeted yesterday:

Promoting @ObviousChildMov across the pond @jennyslate doesnt like it being called an “abortion rom-com” https://t.co/6oTOxwglaY Own it Jenny

hey stubborns: before you tell me that Obvious Child is making jokes about abortion & that i should “own it”,u should see the movie. OWN IT.

I did see the movie, Jenny. It’s a romantic comedy about abortion. Again, own it. What’s the problem?