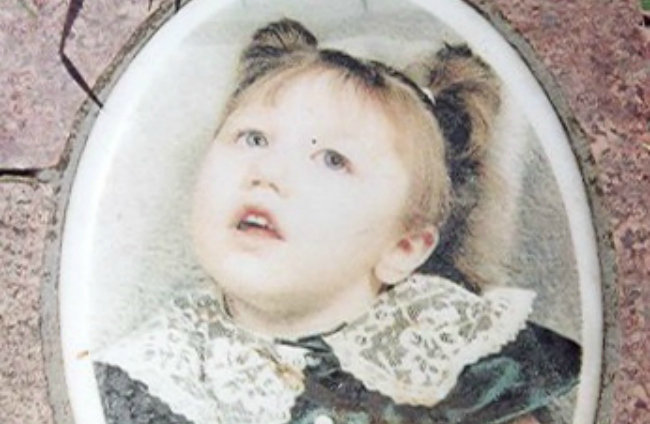 Sarah Brown was born brain-damaged, lame, and blind...but somehow survived for five years. But in the end, the abortion succeeded in killing her.

In July of 1993, a 15-year old mother was brought to Women’s Health Care Services to abort her little girl in the late stages of pregnancy. In fact, so far advanced was the pregnancy that the baby was already in position for delivery.

Not having yet perfected his induction method of abortion, according to accounts, George Tiller “injected the baby’s head, in two places, the left side of her forehead above the eyebrow and at the base of the skull, with Potassium Chloride, leaving permanent burn marks and needle track scars.”

When the young mother returned the next day for the actual abortion procedure, it was found that the baby had not died, as intended, from the lethal injections into her head. The mother was sent to a local hospital where the baby was delivered, wrapped in a blanket, and left in a bassinet without attendance to die.

Amazingly, after 24 hours, the child continued to live in spite of the fact that she had not been cleaned up, her umbilical cord was still attached and she had received no hydration or nourishment. A nurse took pity on the baby and contacted an attorney, who in turn contacted a loving family that adopted the little girl, whom they named Sarah.

Although doctors said Sarah would not survive eight weeks, under the loving care of her new family she lived for five years. Tiller’s attack on Sarah impaired her growth and left her brain damaged, blind, and unable to walk. Nevertheless, her family members never viewed her as a burden and were blessed to be a part of her short life.

It was noted at her memorial service that Tiller succeeded in killing little Sarah, but it took him five years to do it.

This tragic story illustrates not only the depravity of a man who could kill innocent children in such a barbaric manner, but also stands as a testimony to the preciousness of each individual life.