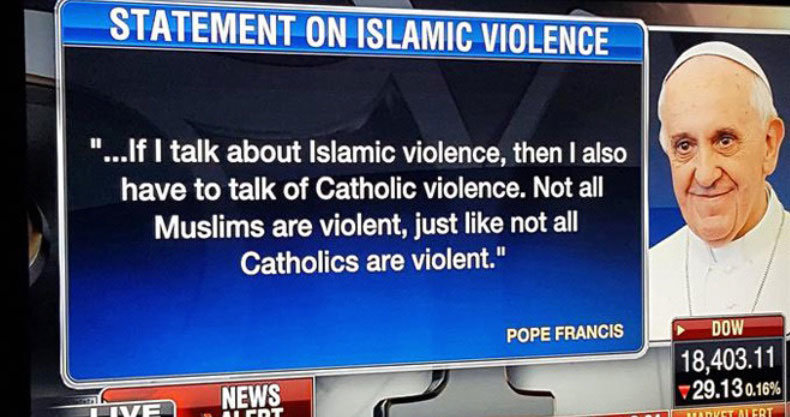 William Kilpatrick is a prolific Catholic author who has specialized in a number of current issues, one of which is the relationship between Islam and modern Christian-based society. His article, on the Crisis Magazine website, The Church and Islam: The Next Cover-up Scandal, initiated especially by what many consider to have been strange remarks by Pope Francis in response to a question about the beheading of a French priest, is a must read.

Kilpatrick raises the question, “Is the Pope doing more harm than good by continuing to deny—in the face of a mountain of evidence—that Islam has anything to do with violence?”

Many are as usual giving the pope the benefit of the doubt and assuming that he has some well-thought-out, long-term strategy for responding as he did. Others see just more of the usual confusion and rejection of orthodoxy or other problems with that response from the world's formost religious leader.

The Pope's comments remind Kilpatrick of another great Catholic scandal:

As I’ve noted several times in the past, the Church’s handling of the Islamic crisis may prove to be far more scandalous than its handling of the sex abuse crisis. The main scandal surrounding the revelation of priestly sex abuse was that it was covered up for a very long time by priests, pastors, and even bishops. By their silence, many Church officials were, in effect, denying that there was a serious problem. The effect on Catholic morale was profound.

He expands on the comparison,

The Church’s handling of the numerous cases of “Islamic abuse” has the potential for causing a greater scandal. The similarities are striking. Once again we have Church leaders who deny that there is any serious problem. This can be seen, for example, in Pope Francis’ repeated assurances that Islamic violence is the work of “a small group of fundamentalists” who, according to him, don’t have anything to do with Islam. And once again, we have a cover-up—this time of the aggressive nature of Islam.

More and more people can see that what the Pope and others in the hierarchy are saying about Islam and Islamic violence doesn’t comport with reality. If things continue in this direction, it will generate an enormous crisis of confidence in the Church…This time the victims of the cover-up will be counted not in the thousands, but in the tens of millions. And this time we will be talking not about damaged lives, but about dead bodies.

We have been experiencing a profound lack of authentic teaching from Catholic prelates and other clergy for decades now. On this issue Kilpatrick warns, “The Church’s current policy of minimizing the violent side of Islam while extolling the positive side amounts to a cover-up of vital information that Catholics deserve to know.”

The author concludes by warning,

What is needed now is a thorough reappraisal of Church policy on Islam. Unless Church leaders develop a more realistic understanding of Islam, it is likely that “#NotMyPope” will soon be replaced with “#NotMyChurch.”

Be sure to read the complete article here.

Should Islamist victim Father Hamel be on the fast track to canonization?