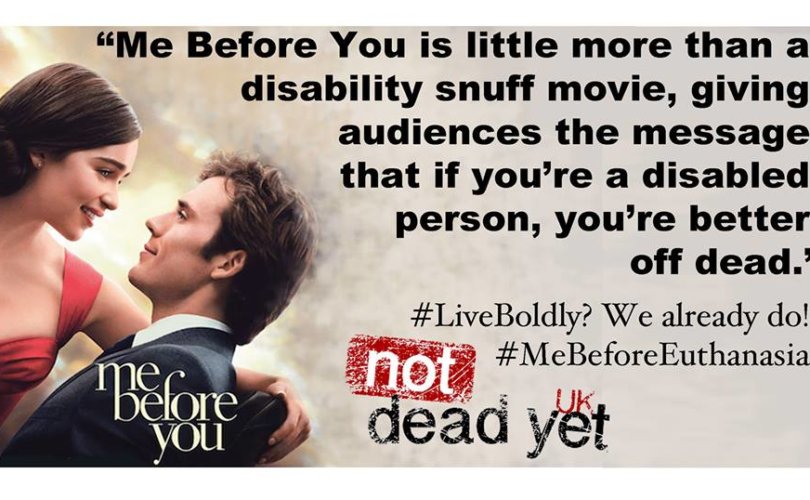 May 26, 2016 (Alex Schadenberg) — The movie Me Before You will be released in theatres across North America on June 3.

The Euthanasia Prevention Coalition is urging its supporters to boycott Me Before You in order to not give any money to the production of movies that perpetuate the ideology that death is better than living with a disability.

We also urge our supporters to donate the admission price to either: Not Dead Yet (donation), Not Dead Yet UK (donation) or the Euthanasia Prevention Coalition (donation).

In the Me Before You plot (Will Traynor) a man who was paralysed in an accident, decides to die by assisted suicide at a Swiss suicide clinic. His family, who are incredibly wealthy, hire Louisa Clark, as his care-giver. As the story progresses, Clark falls in love with Traynor, but Traynor has decided that death is better than living with a disability. Traynor dies by assisted suicide in Switzerland and of course he loves Clark so much, that he leaves her an inheritance.

People with disabilities are fighting for social and attitudinal change. Me Before You perpetuates the idea, that death is better than living with a disability.

To understand the disability perspective, I urge you to read the comments by people with disabilities concerning Me Before You.

The obliviousness here is nothing short of stunning even for a quadriplegic wants to die snuff film. The main character, Will Trayner, is never given a voice. He is a mere foil for Louisa Clark. In a New York Times review of the book the reviewer put it succinctly. William Peace, a Syracuse University professor, known online as Bad Cripple, wrote an excellent article: A Second Class Existence: Me Before You Gets It All Wrong.

“Lou has never fully lived: Will has, but no longer can… He had scaled rock faces at Yosemite, swum in volcanic springs in Iceland, sampled warm croissants in the Marais and had his pick of glamorous, leggy girlfriends. After the accident, he can't walk, can't feed himself, can't have sex. The only power he believes he retains is the power to end his life; and, as a man of action, he wants to exercise that power”.

This is a first. Will is the first asexual romantic hero who wields his power to die. It is a given, he will die because, well, that is what all people who are not quadriplegics believe. The only quadriplegics that want to live are asexual, bitter, angry people who lash out at all the people foolish enough to engage them. Even when a quadriplegic like Will has it all–he is rich beyond belief, lives a life of luxury and can do pretty much whatever he wants–still chooses to die. Out of the goodness of his soul he will not allow himself to ruin Louisa's life hence after his death he wills her his money. Only Hollywood could come up with such a story line that is so grossly convoluted and devoid of reality.

Predictably, there are more than a few angry people with a disability who deeply object to the book and film. If the film is a hit, and I believe it will be, there is no doubt organizations such as Compassion and Choices will exploit its popularity to help pass assisted suicide legislation. Multiple people with a disability have already weighed in with scathing words. I doubt their words will resonate beyond the disability rights community but they reinforce I am not alone. Here are a few links: