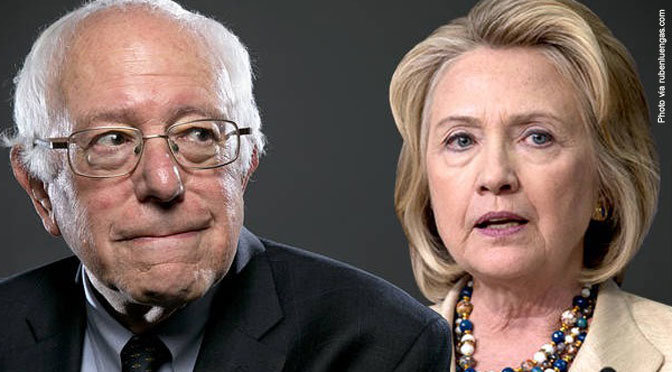 March 16, 2016 (LiveActionNews) — Democratic presidential candidates Hillary Clinton and Bernie Sanders seem to have varying appeals to voters; however, there’s one area where the lines of distinction blur: abortion. Their records show their ascent to the infamous line: Abortion on demand, without apology. Here are three pro-abortion views that Clinton’s and Sanders’ own words and voting records reveal they support.

1. Abortion in all nine months of pregnancy

Republican presidential candidate Marco Rubio made the news for saying Hillary Clinton supported abortion all the way up to the baby’s due date. This comment received scrutiny, but was it true? In Clinton’s own words:

I’ve said … that there can be restrictions in the very end of the third trimester, but they have to take into account the life and health of the mother.

In other words, Rubio’s dramatic comment wasn’t a fictional one. While it’s true that the majority of abortions take place before the third trimester, by Clinton’s own words, if a woman wants to make that decision because of her “health” (which can include economic and mental health by some interpretations), then it’s her choice. Even in the ninth month, when that child could clearly survive outside the womb.

Bernie Sanders has a 100% pro-abortion voting record, and doesn’t support any restrictions on abortion. In his own words, he thinks we need to expand abortion access:

We are not going back to the days when women had to risk their lives to end an unwanted pregnancy. The decision about abortion must remain a decision for the woman and her doctor to make, not the government.

The issue of funding and supporting Planned Parenthood is another one where Clinton and Sanders see eye-to-eye. Even though Planned Parenthood’s breast exams, Pap tests, and cancer screening are dropping, while their abortions increase, the two Democratic contenders don’t seem to have a problem with any sort of abortion focus. They also ignore the over 13,000 real health care clinics across the nation that serve low-income women and their families without abortion.

Clinton, of course, was tapped by Planned Parenthood as its candidate. Giving Clinton the abortion giant’s endorsement was a move that stirred controversy even among abortion advocates, but sent a clear message to the American people on Clinton’s stand with Planned Parenthood. Last summer as the shocking acts of Planned Parenthood’s dealings in aborted fetal body parts were revealed on numerous videos, Clinton had this to say:

I’m proud to stand with Planned Parenthood, I’ll never stop fighting to protect the ability and right of every woman in this country to make her own health decisions.

If this feels like a full-on assault on women’s health, that’s because it is. When politicians talk about defunding Planned Parenthood, they’re talking about blocking millions of women, men and young people from live-saving preventive care.

And Sanders leaves no question on his view of Planned Parenthood. On his own campaign website he says:

3. Letting babies suffer during and after abortion

Both candidates voted against the Partial Birth Abortion Ban, which means they support the right to kill a baby who has emerged almost completely from the birth canal. National Right to Life notes:

The bill banned a gruesome abortion procedure, used in the fifth month and later, in which an abortionist delivers a living baby, except for her head, then punctures the base of the skull and suctions out her brain, after which the now-dead baby is removed from her mother.

And both candidates thought this method of abortion was acceptable. Clinton’s vote was as a senator and Sanders’ vote was as a representative, but their stances were the same.

Likewise, both candidates voted against the Unborn Victims of Violence Act, which states:

Whoever engages in conduct that violates any of the provisions of law listed in subsection (b) and thereby causes the death of, or bodily injury (as defined in section 1365) to, a child, who is in utero at the time the conduct takes place, is guilty of a separate offense under this section.

With their votes, both candidates show that they don’t believe a preborn child is worth protecting in the womb.