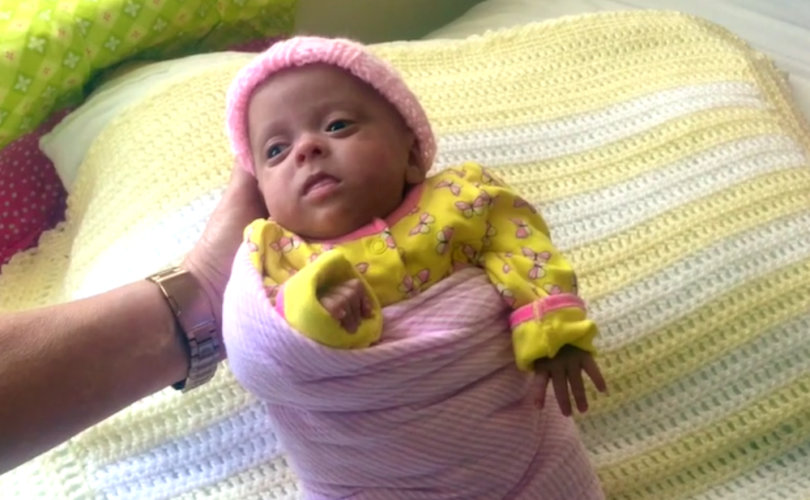 ANNAPOLIS, Md., August 10, 2017 (LifeSiteNews) – A baby girl, born prematurely at just 24 weeks and whose birth weight was equivalent to just three sticks of butter, has left the hospital after a five-month stay.

Ariana Sophia Cruz-Gutierrez is the smallest preemie ever to survive at Anne Arundel Medical Center in Annapolis, Maryland.

Dr. Suzanne Rindfleisch, director of the NICU at AAMC, told the Capital Gazette, “She was 12 ounces and dropped to 8 ounces. It was a long and difficult course for her, but she has a bright future ahead. Being at 24 weeks’ gestation, all the issues of a premature birth were there with the placement of tubes and monitors. She had transfusions and intubations. Her head sonogram was normal, though. And her parents were by her side all these months.”

When she was born, tiny Ariana was not breathing. Her parents, Claudia Cruz and Oscar Gutierrez, despite being warned their daughter might not survive, asked that Ariana be resuscitated.

“We felt like we wanted to die,” Gutierrez told the Capital Gazette. “But now that we've thought of it, it was the best decision we made. Truthfully, when they told us the baby could die, our life changed completely.”

“The baby could die, but with God’s help and blessing, and the incredible work of the people here, everything has turned out well.”