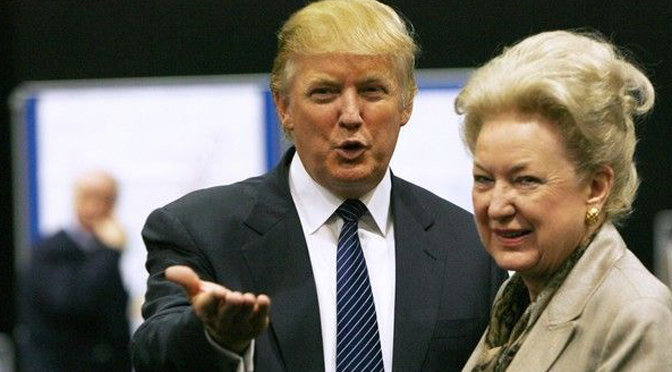 “I said it jokingly. My sister’s a brilliant person, known as a brilliant person, but it’s obviously a conflict. And I said, oh, how about my sister?” Trump told George Stephanopoulos in a new interview, going on to say that “she also happens to have a little bit different views than me” and that it would be a “total conflict of interest as far as my sister.”

Instead, he suggested, “somebody like a Diane Sykes from Wisconsin I think would be very good” as potential Supreme Court appointments.” Sykes, a 7th Circuit judge and former Wisconsin State Supreme Court Justice, was one of two names Trump mentioned during the last’s Republican primary debate, along with 11th Circuit judge and ex-Alabama attorney general Bill Pryor.

Both were appointed to their current positions by former President George W. Bush, and Pryor is quoted as calling Roe v. Wade “the worst abomination in the history of constitutional law.” Sykes, however, recently authored the decision that struck down the Indiana law defunding Planned Parenthood.

Trump’s suggestion of his sister raised fears among pro-lifers because she has ruled in favor of partial-birth abortion. She has also been vocal about her support of keeping the procedure legal. Trump answered an August Bloomberg question about her by saying she was “phenomenal” and would be ““one of the best” Supreme Court picks.

He did go on to say, “We will have to rule that out now, at least,” but contrary to his latest declaration, he did not make clear he was kidding, or whether he meant he would never nominate her, or if he was simply alluding to his earlier-stated contention that it was too early to discuss presidential nominees.

Trump’s latest statements come after GOP competitor Ted Cruz began citing his sister as an example of why, he argues, Trump is unreliable on judicial nominees.