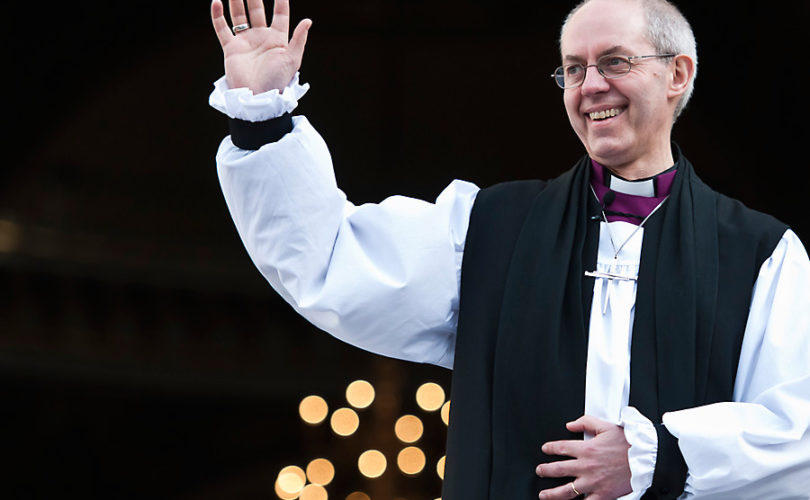 Justin Welby, Archbishop of Canterbury, at his confirmation of election in St. Paul's Cathedral on February 4, 2013.Archdiocese of Canterbury

The Archbishop of Canterbury has added his signature to a letter by faith leaders calling for the Assisted Dying Bill not to pass through the House of Lords.

The statement has been released in response to proposed legislation by Lord Falconer which will be debated on Friday 18 July. It says:

As leaders of faith communities, we wish to state our joint response to Lord Falconer’s Assisted Dying Bill.

We do so out of deep human concern that if enacted, this bill would have a serious detrimental effect on the wellbeing of individuals and on the nature and shape of our society.

Every human life is of intrinsic value and ought to be affirmed and cherished.

This is central to our laws and our social relationships; to undermine this in any way would be a grave error.

The Assisted Dying Bill would allow individuals to participate actively in ending others’ lives, in effect colluding in the judgment that they are of no further value. This is not the way forward for a compassionate and caring society.

The letter comes just days after former Archbishop of Canterbury George Carey announced he’s changed his mind on the issue and was supporting a change in the law (see my critique of Carey here).

Along with the Most Revd Justin Welby, the statement has been signed by Chief Rabbi Ephraim Mirvis, Dr Shuja Shafi of the Muslim Council of Britain and Lord Indarjit Singh of the Network of Sikh Organisations.

This latest stand comes in the footsteps of the unprecedented move by nine faith leaders representing the six major world faiths who wrote a similar letter to peers at the time of the Joffe Bill in 2005.

The full text of that letter can be read here.