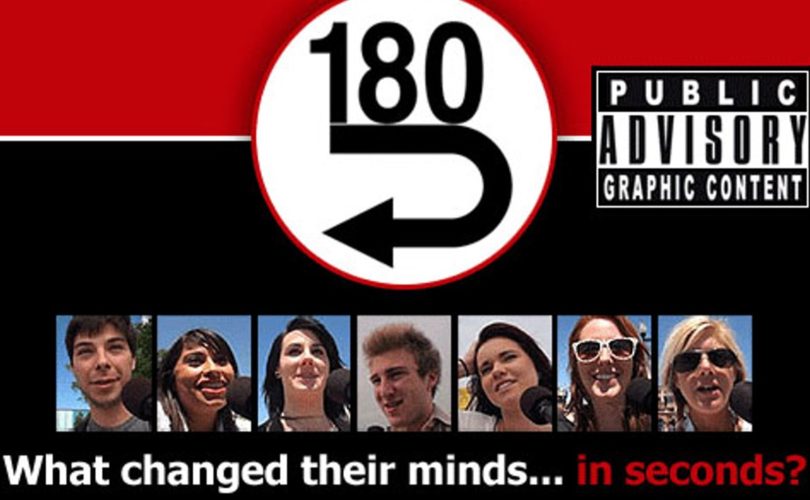 A few days before Christmas, a U.K. mother of two reached out to Christian radio show program Stand Up For Truth with a plea for prayers and support. She had been notified that Child Protection Services would be contacting her because she had permitted her children to watch the pro-life documentary 180.

The controversy began when the mother (who wishes to remain anonymous) included Gospel tracts and a card advertising the 180 movie in party favor jars for a Christmas fair. She distributed these favors at the Church of England Primary School her children attend, and where she was employed at the time. The U.K. mother noted in her letter to the radio program:

I was immediately suspended and told not to reveal any of the details to anyone. I was made to attend an investigative meeting with strict instructions that no legal representation was allowed. The school leadership and the HR representative were pressing…that the film “180” was horrific, had it been watched by a child, even a child who is 10 to 11.

The mother turned in her resignation, but that did not end the investigation. The school’s Board of Directors allegedly equated the parental discretion of showing the pro-life film – which displays nothing more graphic than what one would see on the History Channel – with potential child abuse.

… I was officially informed that because in the course of the meeting I had revealed to them that my children had seen the child inappropriate “180” film, they have notified the Child Protection Services and that they will be contacting me shortly.

We do not watch violent films in our household, but I feel it is important to bring up children, teaching them what is right and wrong, even if the subject is a bit heavy (like the Holocaust and abortion). When my sons were about 10 and 8, I explained to them what those things meant, and the reason I did so is because the sex-ed starts here in U.K. very early …

Following the incident, the film’s producer, Ray Comfort, sent the mother a letter condemning the action by U.K. officials.

“When the government comes in and takes your children from you because they don’t like what you’re teaching your own children, it’s a horror,” Comfort said. “It’s a tragedy.”

In an interview with Live Action, Comfort noted that the incident is unique since the video’s 2011 release.

“Over 200,000 copies of 180 were given away to schools across the U.S., and I don’t think we received any complaints,” Comfort said. “A million copies in total were distributed – 4.6 million views on YouTube.”

The 30-minute film, initially planned as a documentary about Hitler’s religion, became a dialogue on the Holocaust and legalized abortion. During the course of the film, participants changed their minds about abortion when they realized they could no longer justify the murder of innocents in any circumstance.

“I’m Jewish, and what happened in Nazi Germany was horrific,” Comfort said. “What’s happened in America is ten times the amount of lives that have been taken through legalized abortion. We are living in a day of modern holocaust that is sanctioned by the government.”

However, Comfort said positive response to the 180 film has been impressive.

“Women show up at our ministry holding babies that are alive because the mothers who would have aborted watched our film and changed their minds,” Comfort said. “We have a hallway of photos of babies who have been saved.”

The U.K. Department of Health, Social Services, and Public Safety did not reply to an inquiry from Live Action News.