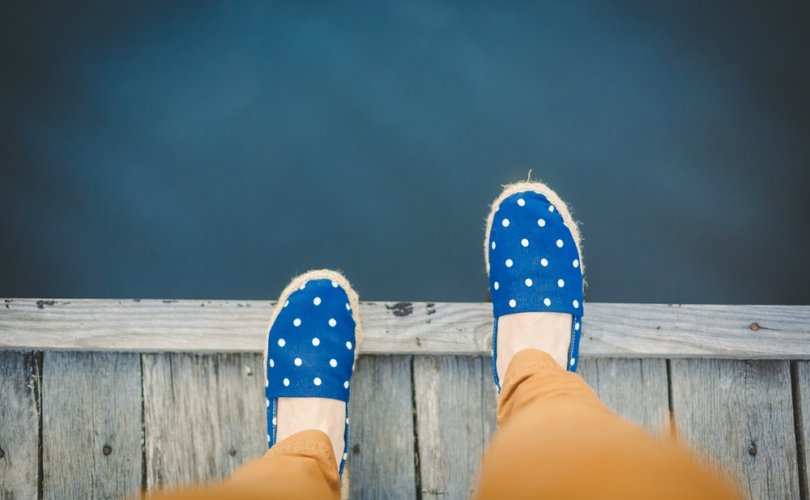 VANCOUVER, British Columbia (LifeSiteNews) — A Vancouver doctor might have been pulled over Granville Bridge to plunge to her death along with the suicidal woman she spontaneously grabbed at the last minute — had she not been seven months pregnant at the time.

Emily Stevens credits her then-unborn daughter, Lily, with giving her the leverage she needed to keep upright as she hung onto the woman for dear life for about two minutes before police arrived.

“I say Lily was my counterbalance because I was a bit heavier than usual and had a different centre of gravity than I usually would,” Stevens told the city’s News1130 when receiving an Award of Merit from the Vancouver Police Department earlier this month.

Stevens was holding six-month-old Lily in her arms at the March 1 ceremony where she and six others received the award, which is given to civilians who put themselves in danger while attempting to save a life, stop a crime, or capture a criminal.

Stevens noticed the woman while walking home last June across the bridge. The bridge runs 90 feet, or eight stories high, over False Creek.

“Initially I walked past her, but something didn’t seem quite right. So, I turned around and I saw her standing on the bottom rung of the bridge and at that point I realized she was likely intending on committing suicide,” she said.

Stevens retraced her steps and began talking to the woman while she called 911.

She talked to the woman for over 20 minutes, as police were briefly sidetracked by another woman, who fit the description Stevens gave them, walking on the other side of the bridge.

When the officers did arrive, the suicidal woman reacted swiftly — but so did Stevens.

“She saw the police car stop, realized what was happening and went to jump,” Stevens said. “I honestly didn’t think. I got in a bit of trouble from my husband later who said, ‘You could have been pulled over the bridge with this woman. What are you doing?’ But I just grabbed her and held on.”

It took only a couple of minutes for the officers to pull both women to safety, and for the significance of what happened to hit Stevens.

“I called my family and said I think I just saved a woman’s life on the way home from work and that was a bit stressful and scary,” she said.

Although Stevens doesn’t know what became of the woman since, she would do the same again, she said.

“I like to think that no matter what, she got another chance at the end of the day to get some help and get better,” she said. “I hope that as my daughter grows up, if she unfortunately has mental issues, that someone else will be there to help her when she needed it.”