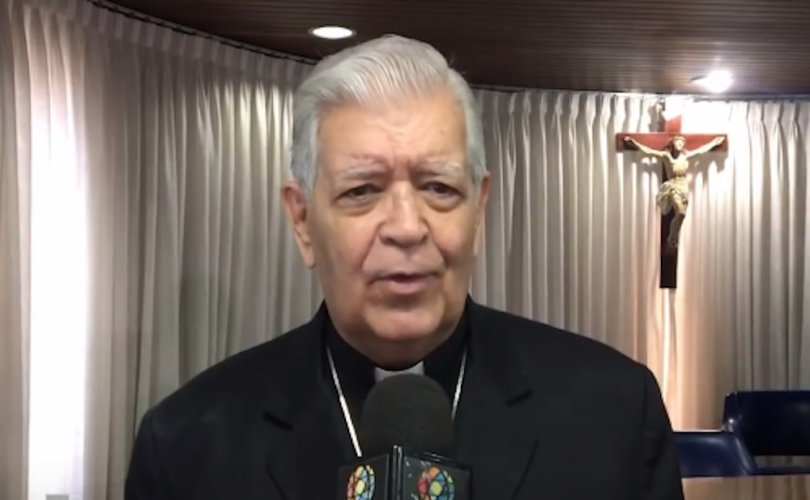 CARACAS, Venezuela, October 22, 2019 (LifeSiteNews) – Cardinal Jorge Urosa Savino said the ordination of married men to the priesthood is an “imperfect and polemical” solution that is neither “appropriate nor useful,” and cited several dioceses in his native Venezuela where ordinations are increasing.

Cardinal Urosa, archbishop emeritus of Caracas, wrote that having “mature married men of proven virtue (viri probati)” is “not as important” as other issues at the Amazonia Synod, even while it is “quite polemical.” He also noted that the Spanish version of the working document (Instrumentum Laboris) does not use the term “viri probati” but identified “elder persons” (personas ancianas) as meriting ordination, thus raising the possibility of the ordination of women.

“There are many serious questions regarding the ordination of these good elder married men,” he wrote in an article in Portuguese at ACI Digital, adding, “And this will not resolve the problems of the current situation. I don’t see it as being appropriate nor useful.”

The cardinal said a life of perfect chastity, to which priests of the Latin rite have vowed, is “something that is perfectly in accord with the nature of the priesthood, which is to imitate Christ: the greatest and eternal priest and good shepherd.”

Cardinal Urosa suggested in his article that outreach to candidates for the priesthood can be improved. In the Venezuelan dioceses of Coro, Maracay, Maturín, Barcelona, Valencia, San Felipe, La Guaira, and others, he noted there has been a significant increase in the number of vocations over the last “40 or 50 years.”

“The Amazonia Synod is in the final stretch,” Cardinal Urosa wrote, following two weeks of liturgies, meetings and parallel activities in Rome. He said there has been a “just and wise” defense of “Amazonian people and integral ecology” at the synod. He noted that while the majority of the Synod Fathers have focused on pastoral matters, “One of these, while not the most important but very polemical, is that of elderly married priests or the ordination of elderly married men.”

The cardinal made a number of points in his reflection on the synod and the ordination of married men.

“In Amazonia, there live 34 million people, of whom only three million are indigenous, the majority of which are not integrated into the social life of their countries,” he said. “Which is to say, indigenous people who suffer from occasional pastoral visits and have no permanent pastoral presence is not the majority of Amazonian people, of which the great majority are native creole or mestizo baptized Catholics or Christians.”

Noting that the area is home to huge cities and has important archdioceses and dioceses, the cardinal said focusing on indigenous people alone would bypass the rest of Amazonian people.

“Some appear to understand it this way, restrictively,” he wrote.

While a chronic shortage of priests cannot be attributed to the entire Amazonian region, Cardinal Urosa said, it is a problem among indigenous communities.

The Instrumentum Laboris offers the ordination of mature married men to celebrate the Mass as a solution to the shortage of priests, even while it denotes celibacy as a gift to the Church, the cardinal said.

“Very good! In effect, in imitation of Christ, celibate and spouse of the Church, the presbyters of the Latin rite and many Oriental churches, freely choose to consecrate our lives to God and the Church,” he said. “We thus renounce marriage and we commit ourselves religiously to God and a life of perfect chastity. Something that is perfectly in accord with the nature of the priesthood, which is to resemble Christ: the greatest and eternal priest and good shepherd.”

The cardinal said he would not discuss the possibility of priestly ordination of women, given that it has been rejected repeatedly by several popes, including Pope Francis.

Regarding the ordination of “elderly married men,” the cardinal said various pros and cons must be considered. While clerical celibacy is not a dogma of the faith, he wrote, the Church would have to contemplate what sort of priests would be ordained if the Amazonian Synod’s suggestions are put into effect.

“Would they be a second class?” he asked, while also wondering if they would be in conflict with other priests. “What would be their economic and administrative regimen, which is to say, how would very poor dioceses or vicariates be able to support them?”

Cardinal Urosa asked whether the ordination of married men would be limited to the Amazonian region and if it could harm priestly celibacy around the world. He noted that one of the Synod Fathers has already said a general synod should be assembled to discuss celibacy for priests all over the world.

Cardinal Urosa wrote that the solution to the shortage is “greater evangelizing and sanctifying activity, to strengthen the life of faith in those Christian communities without priests.” While some dioceses have “recorded a significant increase in priestly vocations” and that the work of missionaries has been “magnificent and sacrificial,” their relative lack of success in securing ordinations should be studied with “sincerely and realism.”

Finally, Cardinal Urosa prayed that the synod will reap positive rewards for integral ecology, but most especially for strengthening and revitalizing the Church in the Amazonian region and in its missionary work to indigenous, creole and mestizo people.

“And may our loving Most Holy Virgin Mary of Guadalupe, Queen of the Americas, intercede for our Amazonian and universal Church,” he concluded.

Cardinal Urosa has been a veteran critic of Venezuela’s socialist government. Pope Francis accepted Urosa’s resignation when he reached age 75 in 2018.