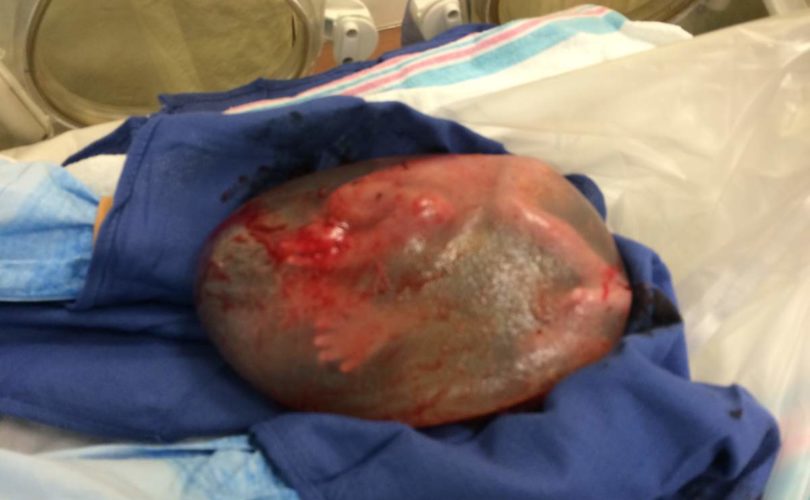 According to reports, this is something so rare that many OB-GYNs will never see it in their careers. In roughly one in every 80,000 births is the baby born with a portion of the amniotic sac, let alone the sac fully intact.

From this amazing photo of baby Silas Johnson, it’s easy to see his hands, feet, head, and little torso, which makes it more horrific to realize that in many states, it’s perfectly legal to rip him limb from limb in the womb through a late-term abortion procedure. According to the Guttmacher Institute, eight states have no gestational limits on abortion, meaning these states allow abortions at 26 weeks – and beyond.

In addition, the pro-life Charlotte Lozier Institute notes many states that do have limits make an exception for the mother’s life and health, and often “allow for physician discretion for what constitutes a health issue for the mother (including mental and emotional health issues).”

Those who advocate for late-term abortions (commonly categorized as after 20 weeks) will often wave the “life of the mother” flag, while others tout abortion as the solution after the discovery of birth defects.

However, the truth is that late-term abortions are far more commonly “elective” than pro-abortion advocates would have us believe.

According to the Lozier Institute:

For many years, abortion-rights advocates have asserted that abortions after 20 weeks are performed because of maternal health complications or lethal fetal anomalies discovered late in pregnancy. However, wider data from both the medical literature and late-term abortion providers indicates that most late-term procedures are not performed for these reasons. Previous survey studies of late-term abortion patients have confirmed that most late-term abortions are performed because of a delay in pregnancy diagnosis and for reasons similar to those given by first-trimester abortion patients: financial stressors, relationship problems, education concerns or parenting challenges.

Late-term abortions are often sought after for the same reasons that first trimester abortions are. Questions of women’s health having little to nothing to do with them.

We’ve long heard the argument that the child in the womb is not human and not a life until birth. At best, pro-abortion advocates call the preborn child a “blob of tissue.” Silas’s little life proves quite the contrary. He is now nearly three months old and doing well!