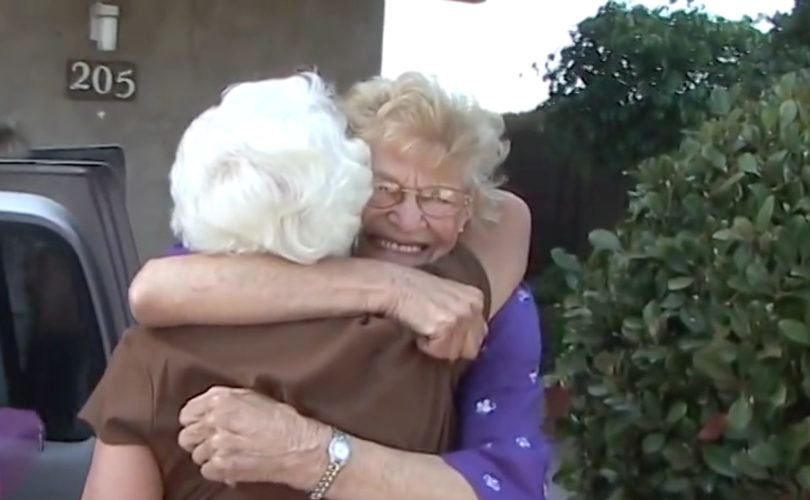 It was 1928 and 16-year-old Minka Disbrow was picnicking in the woods with a friend when three men approached. One of the men acted as the lookout. The other two men raped them.

A few months later, Disbrow, described as an innocent farm girl, discovered she was pregnant.

She gave birth to a baby girl, whom she named Betty Jane. And Disbrow made the tough decision to place her daughter up for adoption, saying: “It hurt. It hurt to give her up because you’d been with her for a whole month. But you knew it was the best for her and I had to go on. I had to go on.”

Disbrow continuously and faithfully wrote letters trying to find out about her daughter, but no news ever came. Finally, after 77 years, Disbrow prayed one more prayer to God to just let her see Betty Jane. She promised she wouldn’t interrupt her life or bother her, but said she just wanted to see her— to see what she looked like, and what her grandchildren and great grandchildren looked like.

It was around that time, in 2006, that a judge finally released the sealed adoption records and Betty Jane, now called Ruth, found her mother.

The two women were reunited and say that it’s as though they were never apart. Disbrow was able to meet not only her daughter, but her daughter’s family, as well – generations of people that wouldn’t exist without Disbrow’s brave decisions to choose life and give her daughter the best chance she could through adoption.

Cathy LaGrow, Disbrow’s granddaughter, has written a book about the reuniting of mother and child called “The Waiting. ” You can see a video about the reunion here.

I finally found my birth mother. That’s when she told me the truth: she had been raped.

I was raped by my fiancé. Then I found out I was pregnant with his baby.

This pro wrestler was conceived when his mom was raped at 11 years old. Now he promotes fatherhood.