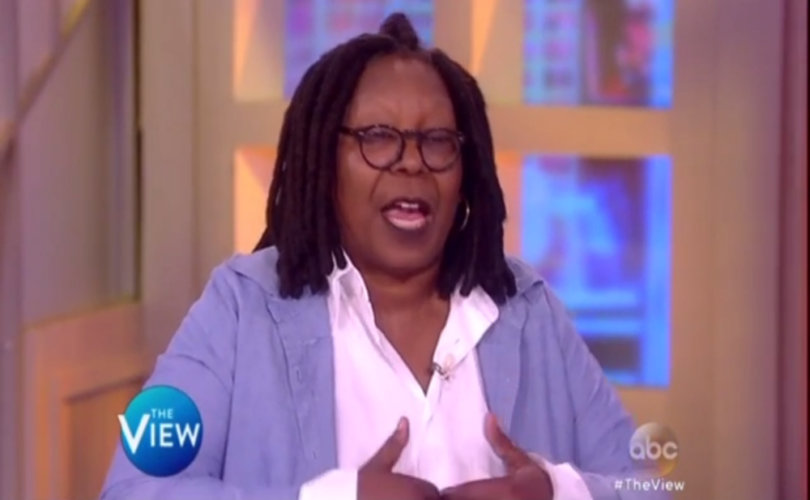 June 27, 2016 (Newsbusters) – Monday’s The View opened by discussing this morning’s Supreme Court decision to rule against Texas abortion clinic safety regulations. The panel praised the decision as a victory for women’s rights to “privacy” while co-host Joy Behar said that the pro-lifers were “just chipping away” at Roe V. Wade. Whoopi Goldberg said she was “thrilled” about the ruling before strangely claiming she was “pro-life;” even claiming that all of the ladies on the show were “pro-life,” they just happened to be for “a woman’s right to choose.” Say what?

The Supreme Court’s decision was celebrated by most of the panelists on the show, with the exception of Paula Faris who tried her best to explain how the laws were meant to protect women. Joy Behar then asked, if the safety measures “[W]ere working pretty well up until now” then “why fix it?” After Faris explained again what the purpose of this law was, the rest of the panel jumped all over her to tell her why she was wrong.

BEHAR: They're basically just chipping away instead of changing the law. Roe V. Wade, they chip, chip, chip.

SUNNY HOSTIN: There's no question I think that the reason the state of Texas decided to sort of put this undue burdens on women is because they were trying to make it more difficult for women to have abortions.

Goldberg added that she thought the laws were impeding on a woman’s right to choose, so she was “thrilled” about the decision, calling it “a great thing.” Goldberg took issue with Faris’ characterization of the pro-life movement’s intent:

GOLDBERG:  I'm going to say this. I want everybody to stop thinking for these women as though they're so dumb they don't do their homework. I get so angry. People don't just go somewhere — this is not an easy decision. People don't come to this easy. This is a tough decision for people to make.

After boasting that she herself was actually pro-life, Hostin trotted out a very pro-choice sentiment:

HOSTIN: The bottom line is we have to respect the woman's right to choose. Because you don't believe in what I believe in doesn't mean I can now put on you my beliefs.

“She also has to be able to make her own decision!” Hostin said. “And that's where — I think that's where the pro-life movement oftentimes goes wrong,” she concluded.

Here is where Joy Behar jumped in to correct Hostin’s word choice, ordering her to call them the “anti-abortion movement.”

JOY BEHAR: Don't call them that. Call them the anti-abortion movement.

HOSTIN: [smiling] I'm not prepared to do that, Joy.

Goldberg, who, like Hostin, had been arguing the same, tired old “woman’s right to choose” arguement (literally the meaning behind “pro-choice”!) again reiterated that she was “pro-life.” In fact, all of the ladies were, obviously!

GOLDBERG: I am pro life. I want everybody to have the life that they want. But I think it's important that you know and that I know that what I decide for my family with my family, with my husband, with whoever, that's our judgment. We talk to God.

Does Goldberg actually know what the term pro-life actually means? Because it doesn’t mean “wanting everybody to have the life they want.” But then again, expecting political sophistication or accuracy from the panelists at The View is a tall order to fill