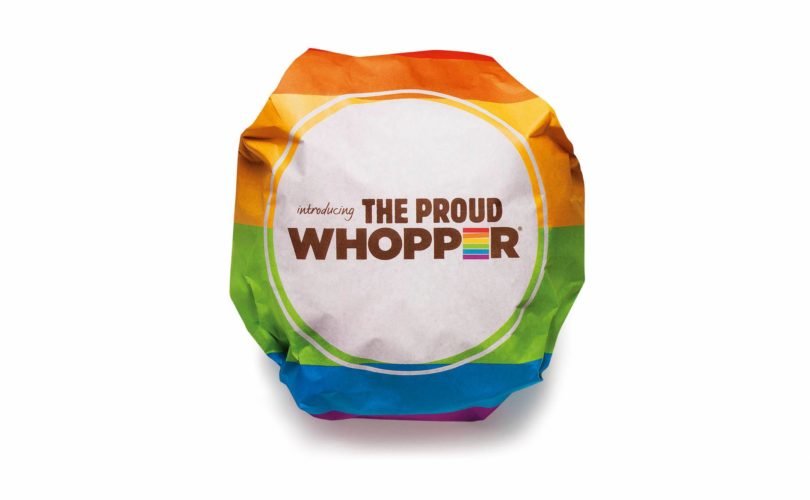 In a brilliant marketing maneuver, a Burger King franchise in San Francisco launched the LGBT-focused “Proud Whopper” campaign. Timed to be released for the June 28 Pride Parade in San Francisco, the burger has created a social media, business, and cultural stir. Its YouTube video advertising the promotion has garnered over one million views since being posted yesterday.

The video is also a brilliant piece of promotional material. It spends time telling people about the “Proud Whopper,” then watches as people try to guess what's different as they chow down. Finally, there are enlightened, wide-eyed expressions from people who read what's written on the inside of the rainbow wrapping: “We are all the same inside.”

Alas, like almost everything else associated with the attempt to normalize same-sex relationships, Burger King's promotion is long on emotions and short on reality and what's best for society. Consider the following:

First, at 31 seconds, a Burger King employee asks a customer if he “want[s] to go with meat or without meat? We can go both ways.” Regardless of one's views on homosexual relationships, this joke is horribly inappropriate for a supposedly kid-friendly restaurant.

Second, those who support same-sex relationships and the “Proud Whopper” are portrayed as hip, cool, and young. The two people who seem critical are old men — whose faces are blurred. One man is in front of a beat-up garage and a motorcycle, while the other has a southern accent. The man with the motorcycle asks, “Do gay people even eat fast food? Really?”

So, in addition to subjecting children and innocent viewers to a distinctly R-rated sexual joke, Burger King is now pointing to those who oppose same-sex “marriage” as ignorant hillbillies. Perhaps they should read the work of Ryan Anderson of The Heritage Foundation, or the teachings of the Catholic Church, for sophisticated theological, social, and cultural reasons why marriage should be supported in society — and false versions of it should not.

Next, the idea that “we are all the same inside” fails on both the physical and spiritual planes. Spiritually, we are not all the same. Yes, we start off the same, but then our sins and the sins of others interfere. And while those who follow Christ's lead on sexual relations — none outside of marriage — find themselves closer to God, those who engage in same-sex relations are putting grave sin between themselves and eternal happiness.

For Catholics, the problem is two-fold. Not only is the person who engages in a homosexual relationship willfully harming his or her soul, but he or she is also cutting him or herself off from the sacraments that help us all overcome sin.

We all commit sin; there is no question about that. But the difference for those who repent versus those who do not is eternal.

Finally, all are not same in the physical realm, either. The Center for Disease Control reports that over 60 percent of new HIV/AIDS cases are result from male-to-male homosexual contact, yet nearly two-thirds of homosexuals who know they have HIV/AIDS do not use condoms to protect sexual partners from the devastating disease.

Unlike a five-franchise fundraiser for Planned Parenthood in 2009 that appeared to be purely local, this effort is getting full-throated support from the company's higher-ups, including a public statement from the Director of West Coast Field Marketing, who said that the company was “giving something back to the community.” And the proceeds will benefit the Burger King McLamore Foundation, reports Huffington Post. According to the liberal website, the foundation will provide “scholarships benefiting LGBT college-bound high school students who graduate next year.”

Personally, I think homosexual men would be better off if Burger King gave “something back” by teaching about the harms of having sex with men. Certainly, such an effort would benefit society a lot more than a misleading promotional campaign.

Then again, saving the souls and bodies of homosexuals is not sexy. But rainbow-wrapped fast-food burgers, apparently, are.