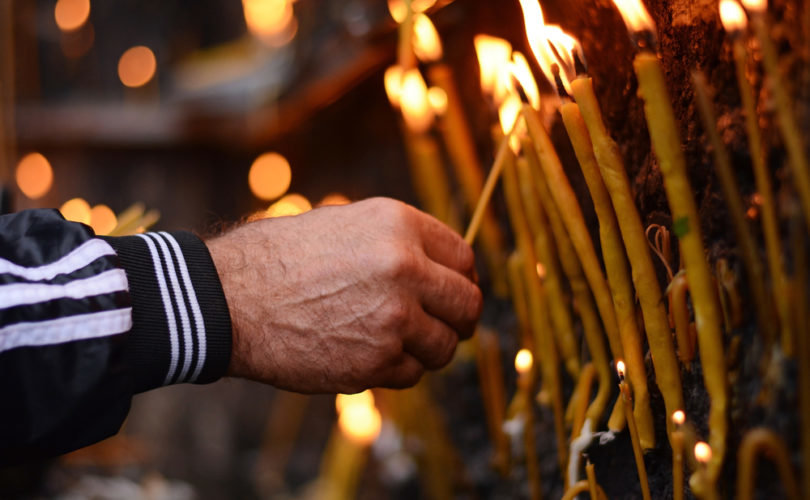 While individuals within the Church regularly fail -- e.g. the priest scandal -- that does not take away from the importance of putting God, and His Church, first.

One of the duties we take most seriously at LifeSiteNews is fidelity to the Church's teachings. We've reported on the priest abuse scandal, held Catholic Relief Services responsible for its partnerships with abortion groups, and noted Catholic politicians who publicly oppose Church teachings on life and marriage.

We also report on news that is less sexy, but no less important when it comes to upholding the Church's teachings. For example, a few weeks ago, we reported on the firing of a choir director at a Chicago parish. The man was fired over his “engagement” to another man.

How do all of these stories relate? They are all about fidelity to the Church by Catholics, but they also attempt to explain to Catholics and non-Catholics alike what the Church teaches — not what dissident individuals or media interpretations pretend the Church says.

It is with this in mind that I would like to address what appear to be a few misunderstandings by hundreds of Catholics in Chicago who believe the aforementioned choir director was unjustly fired.

First, to make sure we're all on the same page, here is what the Catechism of the Catholic Church teaches on the morality of homosexual relationships:

The number of men and women who have deep-seated homosexual tendencies is not negligible. This inclination, which is objectively disordered, constitutes for most of them a trial. They must be accepted with respect, compassion, and sensitivity. Every sign of unjust discrimination in their regard should be avoided. These persons are called to fulfill God's will in their lives and, if they are Christians, to unite to the sacrifice of the Lord's Cross the difficulties they may encounter from their condition.

Homosexual persons are called to chastity. By the virtues of self-mastery that teach them inner freedom, at times by the support of disinterested friendship, by prayer and sacramental grace, they can and should gradually and resolutely approach Christian perfection.

In Chicago, it appears that Colin Collete — the former choir director — does not understand that this is the Church's teaching. In our piece on his firing, we quoted Collete:

“I said, 'I’m not going to resign. God brought me to this moment and God is saying this is why I created you. You are here to live and love,'” Collette told the Chicago Sun-Times.

Likewise, the Chicago Tribune notes that Collete “received a standing ovation” when he walked into a meeting of approximately 700 people who wanted to discuss his firing. So it appears that hundreds of local parishioners also don't understand the Church's teaching.

Now that we've defined what the Catholic Church's view of morality is, as it relates to homosexual relationships, it is important to ask why the parish fired him. It appears that Collete's relationship was accepted by local parishioners, as well as the priest. But when Cardinal Francis George found out that Collete got “engaged” to a man, his employment was ended.

Why did this happen? First, to quote LifeSiteNews co-founder John-Henry Westen, “It is important that a choir director be able to sing and direct other musicians. But it's more important that choir directors be in line with the Church's teachings both for their own sakes and for those in the Church who look up to them.”

In other words, the first and most important qualification to be a choir director at a Catholic Church isn't skill at the material skill, but rather the ability to be an effective advocate and leader for the Church.

Second, the firing happened because Collete posted a picture of himself and his partner on Facebook, and that picture was brought to the attention of the cardinal. Now, not only was Collete violating the Church's teachings in his private relationship — putting his body and soul at great risk — but he was publicly disagreeing with a core teaching of the Church.

To put it another way: By promoting his relationship on Facebook, Collete was causing scandal for the Church. A few excerpts from the Catechism, with emphasis added:

Scandal is an attitude or behavior which leads another to do evil. The person who gives scandal becomes his neighbor's tempter. He damages virtue and integrity; he may even draw his brother into spiritual death. Scandal is a grave offense if by deed or omission another is deliberately led into a grave offense.

Scandal takes on a particular gravity by reason of the authority of those who cause it or the weakness of those who are scandalized. It prompted our Lord to utter this curse: “Whoever causes one of these little ones who believe in me to sin, it would be better for him to have a great millstone fastened round his neck and to be drowned in the depth of the sea.” Scandal is grave when given by those who by nature or office are obliged to teach and educate others. Jesus reproaches the scribes and Pharisees on this account: he likens them to wolves in sheep's clothing.

Anyone who uses the power at his disposal in such a way that it leads others to do wrong becomes guilty of scandal and responsible for the evil that he has directly or indirectly encouraged. “Temptations to sin are sure to come; but woe to him by whom they come!”

Lastly, Collete was quoted as talking about “love.” What is love? I could quote St. Paul, who talked about what love is and is not, but I like the definition I came up with for my own understanding: Love is putting the needs of others first, even — and, perhaps, especially — when it's difficult.

What does that mean with regards to Collete? Like a parent who does not let his or her child do something against the child's best interests, those who uphold the Church's teachings on sexuality must show love to those in the Church, and to God, by holding all members of the Church accountable. Likewise, out of love, Collete must be made aware of the sins he is committing — scandal, pride, and sexual relations — so that he can realize them and change his life accordingly.

Love is not an emotion one feels for another, which Collete's quote indicates. It is about doing what is best for the other — even if the short-term consequences are unpleasant.

Unfortunately, Collete's situation is not the only one facing various parishes and dioceses. Some have seen lawsuits filed, even though the Church is merely acting within the tenets of its faith. Unlike businesses — which rightly look at the bottom line as a most critical factor in making hiring decisions — the Church has a higher calling: To bring all people to Christ. And while individuals in it regularly fail — e.g. the priest scandal — that does not take away from the importance of putting God, and His Church, first.