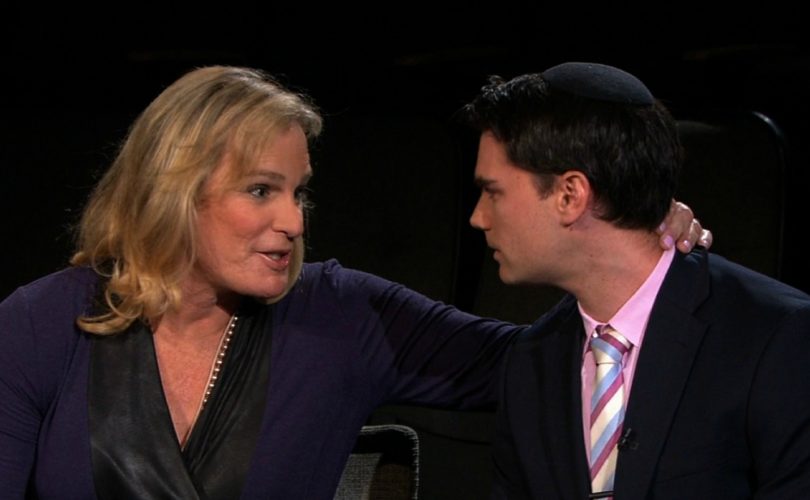 July 23, 2015 (LifeSiteNews) — Last week, Inside Edition transgender reporter Zoey Tur committed an act that should have gotten him arrested and fired: He physically grabbed and threatened Breitbart’s Ben Shapiro during an on-air segment of HLN’s Dr. Drew on Call.

What did Shapiro do to be threatened with hospitalization? He called the biologically male Tur “sir”.

“You cut that out now, or you’ll go home in an ambulance,” Tur said in a threatening voice. Shapiro responded by saying, “that seems mildly inappropriate for a political discussion.”

On Sunday, Shapiro filed a police report, noting that Tur threatened him after the appearance, saying, “I’ll see you in the parking lot.” CNN security escorted Shapiro to his car after Tur left CNN, according to Bretibart.

Tur also said “me, too” when someone tweeted that he would like to see Tur “curb stomp” Shapiro. A curb stomp is a horrific act of violence where an individual is placed open-mouthed over a curb and then stomped on the back of his or her head.

And on Tuesday, Tur admitted on a radio show that he was threatening Shapiro — minutes before he contradicted himself, saying there was no intent to threaten.

It is terrifying that Tur, a much larger male, threatened Shapiro for merely stating what is biologically true – that Tur is a male. What is even worse, however, was the bullying that took place when the other guests, and even the show’s host, chose to criticize and berate the victim rather than object to Tur’s illegal manhandling and threats.

The show's host even took advantage of Shapiro, a victim of Tur's playground bully-style tactics, to promote Dr. Drew on Twitter. According to Dr. Drew, the moment of the threat was “heated” — not, say, illegal threatening:

This is what's so disturbing: Because Tur claims to be female, it was considered acceptable by the female guests, the black guest, and the Hispanic guest to pounce on the Jewish guest. Literally, Tur's threat to inflict severe harm on a smaller, weaker guest for having a different opinion was endorsed and encouraged.

Whatever one’s view of transgenderism, it is clear that Tur definitely didn’t act like a lady. Instead, he acted like a thug. A thug who has attempted to purchase womanhood on the cheap.

Shapiro is right to go to the police; they should act quickly to protect his safety. It is also important that CNN, HLN, and CBS act to protect future guests from the enabling of physical violence seen on Dr. Drew last week. The first step is to never let Tur, or any of the guests who enabled Tur’s violence against Shapiro back on-air. The second is for Tur to be fired from Inside Edition. And the last is HLN to fire Dr. Drew for tacitly endorsing Tur's role of playground bully on his show…all the while pretending to be against bullying.