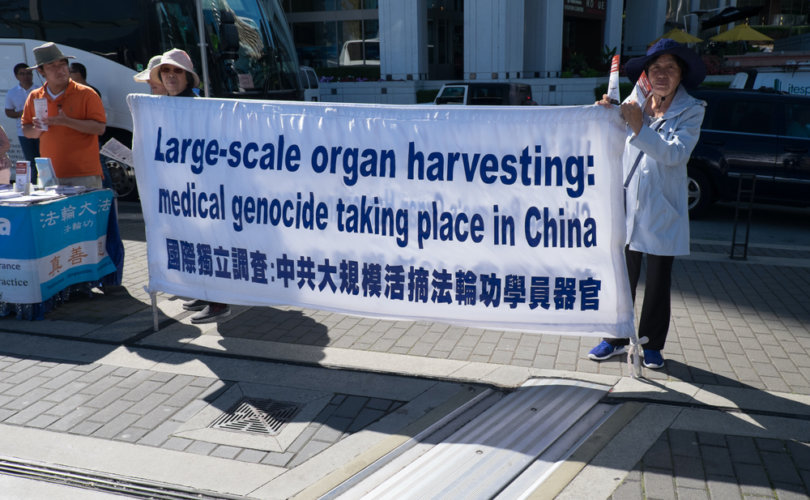 BEIJING (LifeSiteNews) — While some are enjoying the Chinese Communist Party-sponsored Winter Olympics, fewer likely know the extent to which organ harvesting occurs in China and is linked to countries around the world.

Many pro-lifers are likely familiar with the Center for Medical Progress (CMP) videos showing Planned Parenthood executives discussing the harvesting and sale of fetal baby body parts. But American medical institutions are also complicit in the harvesting of organs from unwilling human beings.

Dr. Gilcrease wanted the University of Utah to stop using organs that came from China after learning about the connection from a 2019 report from a London tribunal, the Epoch Times reported. An administrator at the university “essentially said to me that there was no doubt in his mind that the Chinese Communist Party was capable of such atrocities and that it was indeed happening, but that if we said anything, China would simply send all of its students to Texas,” Gilcrease told the newspaper.

“You definitely get support on an individual level, but when you try to raise that to the level of the institution, that’s where it gets deafeningly silent,” he told the newspaper.

“China analyst and investigator Ethan Gutmann estimated that organs from 65,000 Falun Gong practitioners, and 2,000 to 4,000 Uyghurs, Tibetans, were forcibly harvested from 2000 to 2008,” the Epoch Times reported.

Travelers from other countries benefit, for lack of a better word, from this organ harvesting. A Canadian man, for example, received a new kidney after just three days in China.

Dr. Gilcrease’s group, Doctors Against Forced Organ Harvesting, said the barbaric practice has been going on since at least 1984.

“In 1984 the People’s Republic of China … adopted provisions that permitted the harvesting of organs from executed prisoners. This allowed China to perform transplantations in absence of a public, voluntary organ donation program,” the foreword of the advocacy organization’s 2020 report said.

The profiting from organs is the next step in the CCP’s inhumane treatment of its prisoners, many of whom are jailed for having different political beliefs or having religious faith.

“Throughout its history, the Chinese Communist Party (CCP) has incarcerated and eliminated those deemed undesirable by the Party, such as political dissidents, ethnic minorities, and religious believers,” the report continued.

“The President of the Supreme Court in China is quoted in the January 2017 Financial Times as saying that the CCP is above the Constitution, suggesting it holds itself above any Chinese law or ethical standard, and that any kind of persecution or elimination of dissidents sanctioned by the CCP is permissible in China.”

“Forced organ harvesting of prisoners could then be viewed in China, not as a violation of Western ethical standards and laws, but as a legitimate action under CCP rule.”

However, the chances of a Chinese political body ending this atrocity is nil. “As the Chinese Communist Party’s directives surpass the Chinese constitution, there is no independent judiciary system in China that could or would prosecute the state-sanctioned forced organ harvesting.”

So, what must be done? First, the United States could put in place strict restrictions on obtaining transplant organs from China, due to the high likelihood they were not voluntarily donated. The U.S. can also look into ways to prevent Americans from traveling to China for organ transplants.

Second, medical tissue companies could be required to provide a paper trail proving that the organs they receive internationally came from completely voluntarily participants and, to be safe, not from China.

This is similar to how companies must verify that the minerals they obtain are not “conflict minerals,” meaning that they do not come from African countries that use the money to fund civil war.

Third, medical institutions should be required to submit themselves to a third-party audit of where all the organs and human tissue they receive come from. The inconvenience of obtaining documentation from CCP officials may alone deter further organ trafficking.