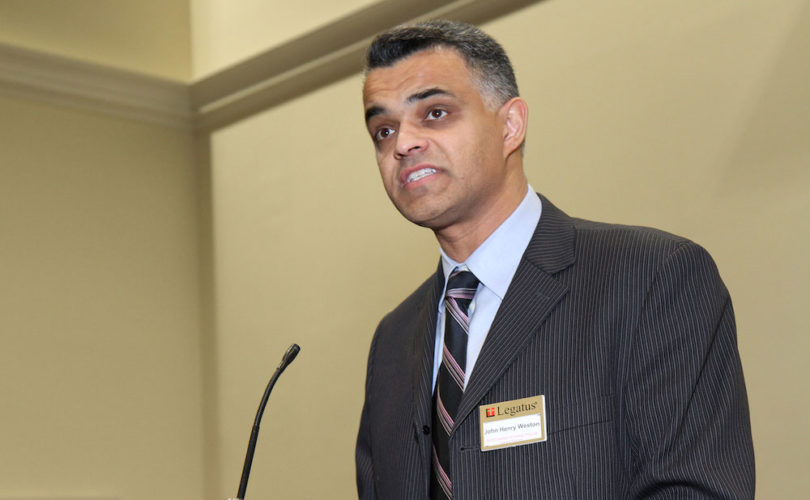 Editor's Note: This speech was given by LifeSiteNews Editor-in-Chief John-Henry Westen to members of Legatus on January 29, 2016 upon receiving the John Cardinal O'Connor Award.

February 2, 2016 (LifeSiteNews) — Thank you Tom and all of Legatus for this incredible honor. I have often looked up to you Tom as a hero in the faith, so coming from you this means a great deal to me. This award, like so much in my life since my reversion to the Catholic faith in my early twenties is a testimony to the awesome generosity and mercy of God even to those who have abandoned Him.

You see, both Steve and I left the practice of faith in our youth. We were on the other side, even of the culture of life. He was a member of Zero Population Growth and I lived a life of hedonism. But God in His mercy brought us back to Himself and has since showered us with blessings, crosses too of course, but many blessings.

Jim Hughes and Steve Jalsevac have been mentors to me in the movement for life. In fact, they, like so many of the soldiers in the work for faith, life and family are the best people anyone could know.

What began as a humble tiny enterprise with a few recipients has grown into an international news service with 60 million page views from 30 million users last year alone. LifeSite, launched in 1997 by Campaign Life Coalition has since launched other organizations including the Rome Life Forum, Voice of the Family with SPUC, and just last September we began a Catholic Magazine called Faithful Insight. Copies of Faithful Insight are available here and we pray you will choose to subscribe to it and that it may be a blessing to you, your family and your friends.

For me none of this would be possible without my faithful wife Dianne.

I wasn’t kidding when I said I’ve been showered by blessings.

I had a saintly father who raised me, a mother who bore me and another mother who sacrificed herself to help raise me.

I have a heavenly Mother who through True Devotion showed me the way to Her Son. And an awesome God who nearly every day since my return to Him in 1993 has given Himself to me Body, Blood, Soul and Divinity in the Holy Sacrifice of the Mass.

What greater joy and blessing can there be anywhere than the life of Christ available even to the poorest of sinners?!!

Like Professor George said yesterday, there is no more comfortable Catholicism. In truth, there never has been. The devil has from the beginning of time gone about like a roaring lion seeking whom he may devour. But in our day he seems to have been unleashed like never before in history.

58 million innocent American children have been killed in their mother’s wombs on American soil in the last 43 years. Where has there been a holocaust like this before?

Yet there is an even greater tragedy in the loss of countless souls. Our Lady of Fatima warned in the early 1900s that more souls go to hell for sins of impurity than for any other reason. At no other time in human history has there been the impurity we see in our world today.

Yesterday Professor George reminded us that life is very short even if we live 90 or 100 years. Compared to eternity, life is but a blip of time and yet in that tiny time we must decide for all eternity to take either the wide and easy way that leads to perdition or the narrow road, strewn with crosses that brings us to eternal life.

You are amazing people dear Legates.

Some of you were soldiers, you are all warriors.

Some of you are bankers, you are all wise investors.

There is no greater battle, there is no sounder investment.

We must fight the greatest enemy mankind will ever know.

We must secure the only treasure that will ever satisfy.

Rise up you warriors for the soul of America. The battle for life and family is raging and you have been summoned to the fight.

Never, be ashamed of the Gospel, said Professor George yesterday.

Or as Christ Himself put it in Mark 8:38 “For he that shall be ashamed of me, and of my words, in this adulterous and sinful generation: the Son of man also will be ashamed of him, when he shall come in the glory of his Father with the holy angels.”

And his promise in Matthew 10:32 “Every one therefore that shall confess me before men, I will also confess him before my Father who is in heaven.”

And later in Matthew 25:34: “Come ye blessed of my Father, possess the kingdom prepared for you from the foundation of the world.”