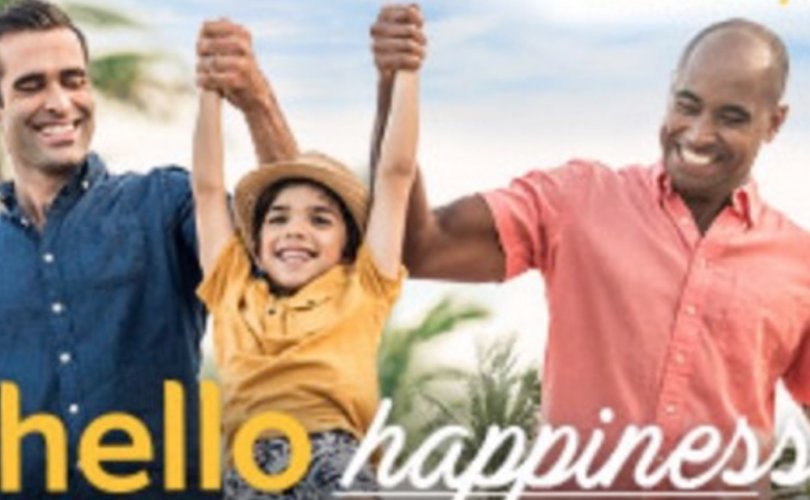 March 12, 2018 (LifeSiteNews) – When it comes to gay “marriage,” things are not what they seem. Same-sex “marriage” is very different from the immutable definition of marriage embraced by every religious tradition for millenia.

Visit any gay-oriented media site, and you’ll quickly discover that vast discrepancy graphically displayed for all to see. It’s a thinly-veiled secret that the mainstream media would rather you not see. LGBTs, on the other hand, clearly don’t give a damn if you do.

The ad shows a presumably “married” gay couple with “their” young son enjoying a vacation at the very gay-friendly tourist destination. It promotes the idea that families headed by two men are no different from families formed by a married father and mother.

Buying the notion that two men can replace a mother and a father requires a certain level of “suspension of disbelief.”

Yet if a website visitor were to cast his or her eyes to the stories adjoining the video ad, a completely different picture of gay “marriage” emerges. This picture of same-sex “marriage” is rooted in truth, not Madison Avenue fiction. Suspension of disbelief becomes impossible.

To one side of the ad – which popped up all over the site’s homepage – was a cluster of links to four articles. The first one presented the regrettable story of the male prostitute who outed scores of priests in a 1,200 page dossier delivered to the Vatican.

The remaining three links, however, all dealt directly with gay “marriage” in some way:

Perhaps most startling was the big headline below the video commercial, with smaller, still versions of the ad popping up throughout.

. . . where he's bringing his fans into his actual bedroom with raw and unedited videos of his personal hook-ups.  These are real guys that Michael is meeting at the gym, on the street and on hook-up app — shot with their permission, of course.

He also spoke about just how forthright some men are when it comes to being showcased on the popular social media app.  “I think what’s been most surprising is how many guys I meet that are willing to have sex with me on-camera.  I guess for young guys who grew up in the social media age, texting dick shots and posting naked pics on hook-up apps is no big deal.”

Sounds like a description of every marriage in your parish and neighborhood, right?

No, of course not. And that’s exactly the point.

Together, these four articles reveal what mainstream media outlets don’t want you to know: Same-sex “marriage” is the antithesis of marriage. It is anti-conjugal and anti-complementary. It is genderless. It is sterile.

It exists to normalize sodomy, which is the sole binding element holding the entire LGBT movement and culture together.

Same-sex marriage was, for a little while, presented as a “conservative” ideal – just long enough for the public to shrug its shoulders and say “okay.”

But now, less than three years after the United States Supreme Court imposed same-sex “marriage” across the land, reality is settling in, and things are returning to normal.

Gay “marriage” was never compatible with the one true, immutable definition of marriage. It was never “conservative” in any way.

It remains precisely what the LGBT world (up until recently) had always honestly presented itself to be: Unabashedly countercultural and a chance to “stick it” to the establishment, especially Christians.