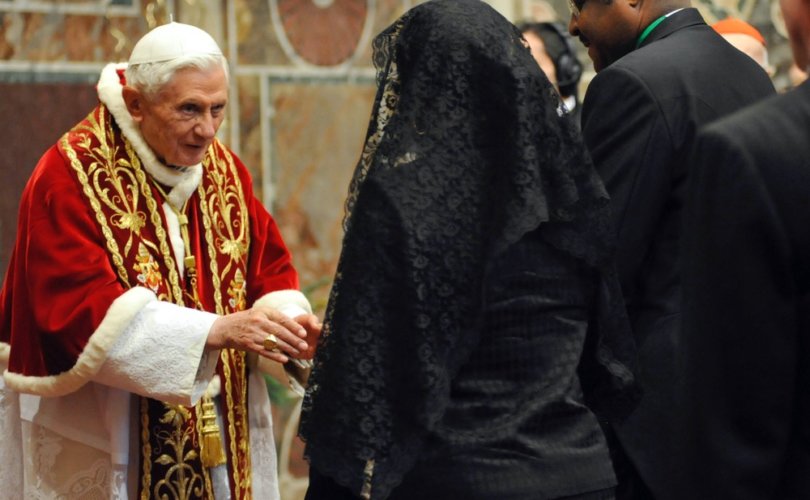 May 4, 2020 (LifeSiteNews) – Dr. Robert Moynihan, the editor-in-chief of the Catholic journal Inside the Vatican, revealed on April 23 that he once had a conversation with then-Cardinal Joseph Ratzinger (who later became Pope Benedict XVI) about the “greatest danger to the Church,” and he recounts that Ratzinger said: “It is Freemasonry.” These words have a special importance in light of Pope Benedict’s recent words about the “world-wide dictatorship of seemingly humanistic ideologies” that are fostering a “fear of the spiritual power of the Anti-Christ.”

Let us first consider here Moynihan’s own full report on that memorable conversation.

“I recall a conversation that I had with then Cardinal Ratzinger a few years before he became pope,” Moynihan writes on his website. “We were in his apartment, not far from St. Anne’s Gate. We were discussing his conflict with Cardinal Walter Kasper over the question of Universal Church and Particular Church which was much in the media at that time. I asked the Cardinal where the greatest danger to the authentic Catholic faith lies. ‘Is it in our own selves, our own sins and weaknesses. Is this what is the greatest danger to the Church or is it something else, some external enemy?’”

Moynihan continues: “He looked at me directly in the eyes and then after a moment’s pause, as if he were reflecting, he said: ‘It is Freemasonry.’”

“I never forgot that conversation as it was [a] fixed point that brought to a conclusion a long series of questions that had concerned me up until that meeting and have concerned me since.”

This report comes to us because Dr. Moynihan received a letter from one of his readers concerned about the fact that in recent times, Freemasons are making attempts to undermine the Catholic Church’s ban on Freemasonry.

This revelation on the part of Dr. Moynihan is especially important in light of the fact that Pope Benedict XVI, in recent comments to his biographer Peter Seewald, spoke of the “spiritual power of the Anti-Christ” of which many are afraid, especially when opposing the modern agenda of abortion, homosexuality, and in-vitro fertilization. He spoke of a “world-wide dictatorship of seemingly humanistic ideologies.”

“Today, one is being excommunicated by society if one opposes it [this ‘dictatorship’],” Benedict told Seewald for his new book Benedict XVI: a Life (published first in German by Droemer Verlag).

In order to understand where certain elements of this “world-wide dictatorship” come from, we can turn to Bishop Athanasius Schneider, who gave, in 2017, a talk on the 300-year-old history of Freemasonry. He delivered this talk for the Kirche in Not organization, a Pontifical Foundation. Bishop Schneider has kindly provided LifeSiteNews with an English manuscript of this talk.

In this talk, Bishop Schneider described the characteristics of Freemasonry based on multiple scholarly sources. After describing them in detail, he concluded: “In fact, Freemasonry is the perfect Anti-Church, where all the theological and moral foundations of the Catholic Church are turned into their opposite! A Freemason told his sister in a private talk the following: ‘Do you know what we Freemasons are in fact? We are the anti-Church.’”

According to Bishop Schneider, Freemasonry also promoted “the so-called ‘sexual revolution’ of 1968.” He explains: “The two Grandmasters of the two largest Freemasonic organizations in France, Frédéric Zeller and Pierre Simon, were with some of their members actively engaged in the Paris student revolts in May 1968. The said Grandmaster Pierre Simon became then assessor of the minister Simone Veil, who legalized in France abortion.”

Further expounding on this topic, Bishop Schneider states that Freemasons were crucial in the promotion of abortion, same-sex “marriage,” and euthanasia in France.

Here, Schneider points out that “in 2012, the Parish Newspaper Le Figaro published a comprehensive dossier about Freemasonry and Le Figaro let top Freemasonic members speak in its newspaper forum. One of these Freemasonic officials openly stated that the laws about legalization of abortion, the so-called ‘same sex marriage’ or ‘marriage for all’ and of the euthanasia were prepared in the idealistic Freemasonic ‘laboratories’ and that they were then, with the help of lobbying and of their members in parliament and in the government, pushed through the legislation.”

Bishop Schneider also gives the exact reference to this issue of the French newspaper, saying that “this can be read in the newspaper Le Figaro of the year 2012 (supplément LE FIGARO, 20-21 Juillet 2012).”

Then-Cardinal Ratzinger was already in the 1980s so concerned about the nature and work of Freemasonry that he worked out a statement for the Congregation for the Doctrine of the Faith, whose Prefect he then was, which repeated the Church’s long-standing ban on Freemasonry. That is to say, he re-stated that Catholics may not be members of Freemasonry. On November 26, 1983, Ratzinger signed a document that stated, “Therefore the Church’s negative judgment in regard to Masonic association remains unchanged since their principles have always been considered irreconcilable with the doctrine of the Church and therefore membership in them remains forbidden. The faithful who enroll in Masonic associations are in a state of grave sin and may not receive Holy Communion.”

This document came into being because the new Code of Canon Law that was promulgated that year under Pope John Paul II surprisingly lacked an explicit ban on Freemasonry. It does not mention Freemasonry by name when it states: “A person who joins an association which plots against the Church is to be punished with a just penalty; one who promotes or takes office in such an association is to be punished with an interdict.”

Dr. Ingo Dollinger played an important role in restoring clearly the 1983 ban on Freemasonry. He was a German priest from Augsburg who had led the discussions between the German Bishops’ Conference and Freemasonic lodges between 1974 and 1980, at the end of which stood the statement of the German bishops that membership in a Freemasonic lodge is “incompatible” with the Catholic faith (see this report for a more detailed description of Father Dollinger). According to his private secretary, Dollinger, after seeing the ambiguity of the 1983 Code of Canon Law, then approached Cardinal Ratzinger, who set up a commission in order to issue the above-mentioned clarification, with the approval of Pope John Paul II.

Thus, this 1983 CDF statement insisting that Freemasonry is incompatible with the Catholic faith is a further proof that Cardinal Ratzinger, indeed, was aware of the work of Freemasonry. It is thus important to know that he even thought, at least at some point in his life, that Freemasonry was the greatest danger to the Church.