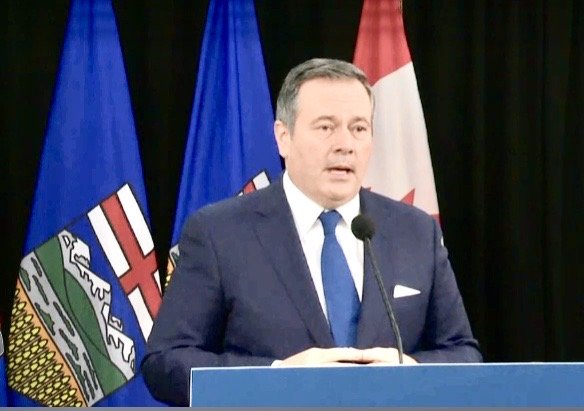 EDMONTON, Alberta, November 27, 2020 (LifeSiteNews) – Premier Jason Kenney claimed that his province is not in a “lockdown” despite saying for “the first time in the history” of Alberta that all indoor gatherings with people outside of a household are “not allowed.”

“On my Facebook page there are thousands of very angry people saying that this is a lockdown. First of all, it's not,” Kenney told reporters on Tuesday at a press conference announcing the new health measures in Alberta.

“To those folks, I say this: This is not an abstraction, if you know somebody waiting for surgery, someone in your family, a friend or a neighbour … this is for them.”

On Tuesday, Kenney declared a state of public-health emergency in Alberta for the second time this year over COVID-19, announcing “bold” measures he claimed are needed to help turn the tide on the virus.

“For the first time in the history of our province, we've just told people that they're not allowed to have anybody over to their homes … and they're going to be fined if they do,” Kenney said to reporters at Tuesday’s press conference.

Until Tuesday, Alberta had the least restrictions of any province in Canada concerning indoor private gatherings in particular. Not anymore.

Even Ontario, with its tiered color-coded level of restrictions, allows for up to 10 people to gather inside a home, except for in the Toronto and Peel region which are under the gray “lockdown” category.

“Let me just be absolutely clear about this: Social gatherings are the biggest problem,” he said. “Many people may think that a family dinner or get-together with friends is no big deal, just normal. And we don’t imagine when we gather with family that people are going to be transmitting a virus like this. But it is the key reason why COVID-19 is winning. These gatherings in the home continue to be the largest source of transmission. And so they must stop now.”

Families are not permitted to have anyone outside their household visit, although there are some exceptions, such as for caregivers or for those who live alone. Outdoor gatherings are limited to 10 people province-wide as well.

Kenney told reporters that Alberta would not set up so-called “snitch lines” but threatened that rulebreakers could be fined up to $1,000 for individuals and up to $100,000 for serious offences.

“We will enforce these rules against indoor social gatherings, and those who break these rules will be subject to fines,” Kenney said. “We’ll also look at ways to allow peace officers to deliver fines for anyone violating these limits.”

Kenney’s claim that his latest measures do not put Alberta into a “lockdown” was blasted by attorney John Carpay, president of the Justice Centre for Constitutional Freedoms (JCCF).

“If George Orwell were writing his novel in Alberta today, he could have added a fourth slogan to his government’s list of mantras: ‘War is peace; Freedom is slavery; Ignorance is strength; There is no lockdown,’” Carpay wrote in an opinion column published in the Western Standard this week.

Carpay minced no words in his disapproval with Kenney’s notes about a non-“lockdown,” saying Kenney does not know what it's like to live off government subsidies or take care of kids at home due to schools being shut.

“Our caring and compassionate premier magnanimously acknowledges that these severe restrictions on our Charter freedoms to move, travel, assemble, associate and worship will be ‘disruptive to businesses and to all Albertans.’ Not a lockdown; just “balanced” measures that are a bit “disruptive,” Carpay wrote.

“Not that our premier would know what it’s like to have to take care of children at home when you are used to them attending school from 9:00 to 3:00. Not that our Premier’s own public sector salary will in any way be impacted by his own measures. Not that he would ever need to survive on only $2,000 per month in government benefits while shouldering the responsibility of supporting a family and paying for rent or a mortgage.”

In addition to banning in-person gatherings with members outside one’s household, Kenney announced new gathering limits on churches, saying they are allowed to operate at only one-third capacity. Masks will also be mandatory for all places of worship.  These rules apply to the majority of the province, with some areas unaffected however.

Funerals and weddings will have strict limits of only 10 people, and receptions are banned. Also, junior and senior high schools have been closed until January 8, with elementary schools to retain in-person learning for now.

Masks for indoor work settings in Calgary and Edmonton, the province's largest cities, are now mandatory.

Sports across the province were also banned, and all retail stores can stay open, but in most regions only at 25 percent capacity. Restaurants and bars can operate as well, but only six people from the same household can be seated at tables.

Like the rest of Canada, as well as virtually every nation in the entire Western hemisphere, Alberta has seen a rise in reported positive cases of COVID-19. Currently, there are 14,052 active cases.

While 510 deaths have been attributed to COVID-19, the province's official data show that most of those deaths were in instances where a person had three or more comorbidities.

A total of 76.3 percent, or 363 people who the government lists as COVID-19 deaths, had three or more comorbidities, with hypertension leading the way as the number one co-factor of death.

Not all doctors in Alberta agree with government-imposed COVID restrictions.

A renowned Canadian doctor with extensive credentials spared no words in blasting government-imposed COVID-19 measures at a public city meeting in Edmonton recently, calling masks “utterly useless” and saying the virus is “not Ebola.”

As for Carpay, he wrote that the “media-supported fearmongering about large numbers of ‘cases’ is misleading in the extreme.”

“Aside from the small number of people who actually require hospitalization, 97 percent of these ‘cases’ concern healthy people experiencing no symptoms, and a small number experiencing symptoms which they can take care of themselves at home. Not my opinion; check the data for yourself.”

The JCCF has been very vocal in opposition to lockdowns across Canada and has promised litigation to fight back.

The group has said it is “deeply concerned about government actions that are being taken to deal with COVID-19.”

“We are working very hard behind the scenes on this issue to ensure governments meet their obligations under the Canadian Charter of Rights and Freedoms,” reads the JCCF website relating to COVID-19.