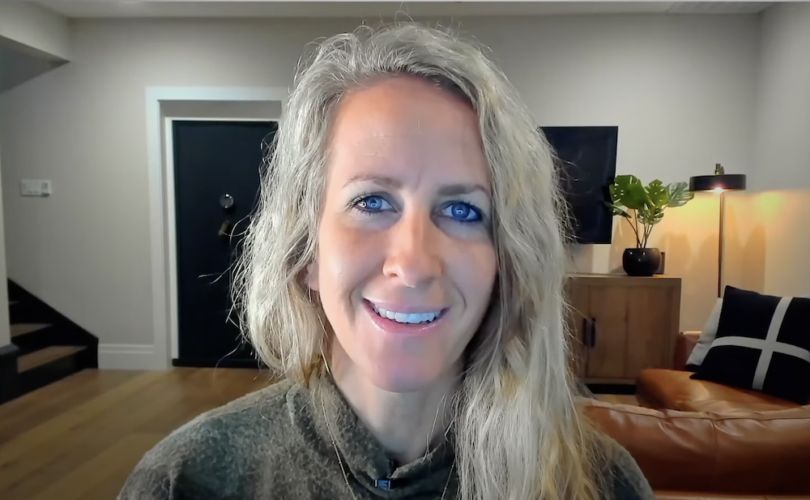 INDIANAPOLIS (LifeSiteNews) – The Archdiocese of Indianapolis bowed to LGBT activists and postponed an event with a speaker who renounced her homosexuality and returned to the Church.

A since-deleted post about the event on St. Luke’s website read, “Kim began experiencing same-sex attraction as a teenager. She shares her experience of finding true joy in sharing the love, freedom and restoration found through her personal relationship with Jesus Christ.”

In a biography on the Overcome Ministries site, Zember notes that she “found great freedom” in rejecting same-sex relations and that doing so also freed her from “anxiety, depression, and duplicity that were continually present in my past lifestyle.”

Zember additionally operates a charitable ministry in Ethiopia that provides food and education to children who have lost one of both of their parents. Proceeds from the event at St. Luke Catholic Church would have benefited that ministry, according to the church’s post.

But after blistering attacks from LGBT pressure groups, St. Luke and the Archdiocese of Indianapolis announced earlier this month that Zember’s talk would be postponed to allow for “discernment” about whether to proceed with it.

— Article continues below Petition —
Demand that the Archdiocese of Indianapolis let Kim Zember speak!
Show Petition Text
4966 have signed the petition.
Let's get to 5000!
Thank you for signing this petition!
Add your signature:
Show Petition Text

“The non-obligatory event was intended to focus on the Christian virtue of chastity,” Greg Otolski, executive director of communications for the Archdiocese of Indianapolis, said in a statement to local news outlets. “The Catholic Church respects the God-given dignity of all people and teaches that we are all called to live a chaste life. The event has been postponed to allow for discernment regarding how best to proceed with an event that takes the various concerns into consideration.”

In a parish bulletin, St. Luke pastor Msgr. Joseph Schaedel echoed those comments and appeared to downplay the event’s focus on same-sex attraction:

Although it was meant to be much broader to many, this event appeared to be only focused on the Christian virtue of chastity as it pertains solely to a specific population of our Catholic youth and adults. Reaction on the part of many to the proposed program brought about a realization that many Catholics are confused about the importance of this virtue as a way of life for all of God’s people. In order to do so, this particular event has been postponed to allow for discernment regarding how best to proceed with an event that more clearly takes all of these concerns into consideration.

According to local outlet WISH-TV, “many LGBTQ youth groups” targeted Zember’s event, using now-standard leftist rhetoric that any opposition to sexual depravity or disordered identities is a form of “hate” or “harm.”

One group, Shelly’s Voice, “said it immediately got to work calling for [the event’s] cancellation,” WISH-TV reported. “Our strongest message to religions like this is it is not acceptable for you to use your God to justify your hate,” said Eli Aldrich, executive director of Shelly’s Voice. A press release from the group says that it plans to protest Zember’s talk if the archdiocese reschedules it.

Another protest listed on allevents.in urges people to “show up on the sidewalk in front of St. Luke’s Catholic Church to protest this despicable anti-LGBTQ agenda.”
And after a local Catholic high school promoted the event on Twitter, a group launched an email campaign to “call out” the school’s president for “promoting the spread of hateful thoughts and actions on the lgbtq+ community.”

“Kim Zember promotes homophobic ideologies and is harmful to young adults and students everywhere” due to her adherence to Catholic teaching on sexuality, the campaign message claims. “To ensure the safety of your students and the surrounding community, immediate action must be taken,” it adds.

“As the North Deanery high school of the Archdiocese of Indianapolis, we help our 10 deanery parishes promote their events when requested,” Bishop Chatard High School said in a statement dated September 16. “We have recently posted an unvetted promotional request on our website. We have since learned that this event was not submitted for approval to the parish or the Archdiocese of Indianapolis.”

LifeSiteNews reached out to the Archdiocese of Indianapolis and Zember for comment. This article will updated with any response.

The Catholic Church teaches, as it has for millennia, that homosexual acts are “intrinsically disordered” and gravely sinful and that same-sex attraction itself is “objectively disordered.”

Same-sex relations “are contrary to the natural law,” states the Catechism of the Catholic Church. “They close the sexual act to the gift of life. They do not proceed from a genuine affective and sexual complementarity. Under no circumstances can they be approved.”

The Church has further warned that “the practice of homosexuality may seriously threaten the lives and well-being of a large number of people,” as underscored by the recent monkeypox outbreak and homosexuals’ massively higher risk of HIV and other STDs.