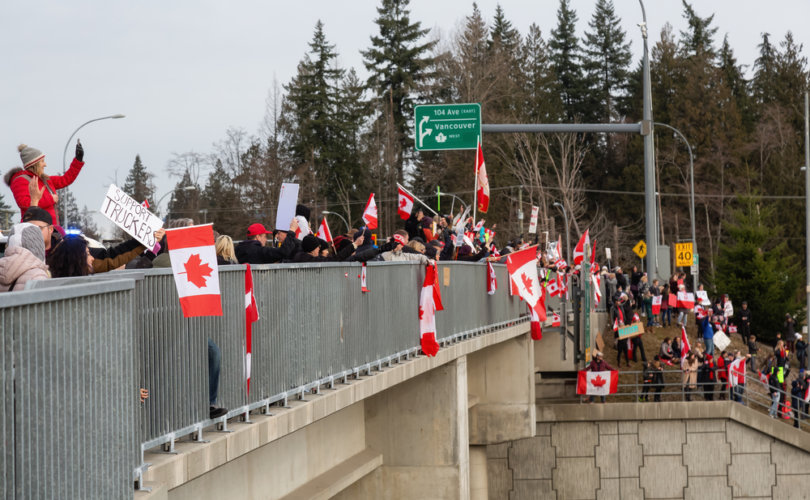 (LifeSiteNews) – GoFundMe on Wednesday “paused” the “Freedom Convoy 2022” fundraiser, but the group is now working with top lawyers from the Justice Centre for Constitutional Freedoms (JCCF) to ensure that the funding situation can be quickly remedied.

Today, the group held a press conference in Ottawa to confirm both the legal help from the JCCF and the issues with GoFundMe.

“We are here out of love for our families, communities and our nations,” said group leader Tamara Lich, adding that “common people are tired of the mandates and restrictions in their lives that now seem to be doing more harm than good.”

Lich said the group “will continue our protest until we see” restrictions lifted. She also confirmed that no one from any government at any level has contacted the group.

A notice placed on “Freedom Convoy 2022” by GoFundMe administrators states, “This fundraiser is currently paused and under review to ensure it complies with our terms of service and applicable laws and regulations.”

“Our team is working 24/7 and doing all we can to protect both organizers and donors. Thank you for your patience,” the message adds.

Keith Wilson, a lawyer for the JCCF, was onsite at today’s press conference, confirming that he has submitted to GoFundMe all of the details required to get access to the funds.

“The bulk of the money is continued to be held by GoFundMe,” Wilson said.

“GoFundMe, because they were bombarded with an orchestrated social media and other campaigns to try and shut it down,” Wilson said, has “exercised heightened due diligence, which we welcome.”

Wilson noted that is why GoFundMe paused the campaign.

On Monday, Wilson said, the group took the first steps to incorporate on behalf of the freedom convoy, a “not-for-profit Canada corporation.”

Wilson said the group has also taken steps to establish the appropriate “banking and other arrangements,” pointing out that all of the funds “have not yet made it to that bank account and being held in trust for the benefit of the movement.”

Wilson said when GoFundMe releases the funds, the “corporate lawyer experts on the team” along with accountants will refine the process of reimbursing those involved in the convoy.

Daniel Bulford, who recently stepped down from the Royal Canadian Mounted Police (RCMP), is the head of the group’s security, and he confirmed at the press conference that the truckers are working with local police and that there are no major issues.

The press conference was cut short, however, when some mainstream journalists in attendance started shouting at Wilson out of turn. Wilson, along with Lich and the others, quickly left the room.

LifeSiteNews today spoke with Chris Barber, one of the group’s organizers who confirmed that the fundraising campaign is under review but that they have lawyers from the JCCF helping them.

“JCCF has a team of lawyers who are here and ready to defend to make sure everything goes the right way,” Barber said.

“Any question GoFundMe had for us has been answered properly, and we should have everything resolved soon … just some logistical stuff.”

Barber told LifeSiteNews that the GoFundMe has not been the “easiest” group to work with, but noted he is confident everything will get rectified shortly.

JCCF director of communications Marnie Cathcart confirmed with LifeSiteNews that they do have a team of lawyers helping the “Freedom Convoy 2022” group.

The JCCF sent out a press release today stating that “it is representing the Freedom Convoy 2022 in Ottawa and has a team of lawyers on the ground providing legal assistance and advice.”

A message posted on the official Facebook page for the “Freedom Convoy 2022” on Wednesday confirmed GoFundMe’s actions.

“Donations through Go Fund Me have currently been paused … We continue to thank you all for your support,” reads the message, adding that donations through e-transfer can be sent to [email protected] in continued support of the group.

Lich tweeted out a message yesterday saying “lawyers and accountants are on site” and that the group is dealing with “so many bottlenecks.”

“The speed at which the rumour mill operates is amazing. Rolling on the floor laughing. If there are major changes and/or problems we will inform everyone on the GoFundMe page, on this twitter, or @BJdichter,” Lich added.

Lich was referring to the group looking to set up the non-profit, which she confirmed in a Facebook live video posted yesterday.

“Everything’s getting sorted out,” she said.

Barber confirmed with LifeSiteNews that the group is attempting to establish a non-profit, which can then they hope to be used to help distribute the funds to truckers in need.

Ottawa City Councillor Diane Deans had called for GoFundMe to stop sending money to truckers earlier in the week.

As the trucker convoy neared Ottawa, Trudeau fled the city, citing a COVID positive case in his family as the reason. On Monday, he tweeted that he had tested positive for the virus despite having had three COVID jabs.

The “Freedom Convoy 2022” group says they are not going anywhere until their demands are met.

Last week, the group listed its demands of the federal government. The demands include removing “all vaccine passports, including inter-Canada passport systems,” along with eliminating all “mandatory programs of vaccination and contact tracing.”

LifeSiteNews has started a petition “Stand with Canada’s Truckers!”

“Canadian truckers are fighting back against Justin Trudeau’s Covid overreach and medical tyranny, and are giving people across the country — and the world — a new voice for freedom!”

The petition will be delivered in person to Trudeau as well as to the Freedom Convoy leaders.