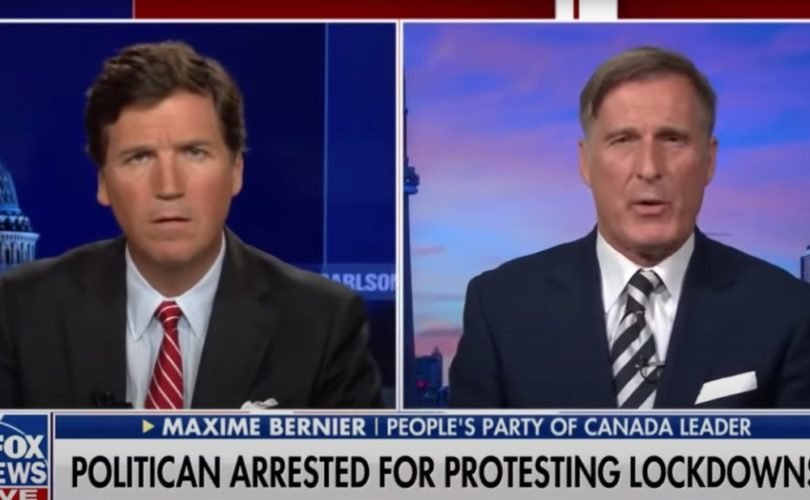 CANADA, June 21, 2021 (LifeSiteNews) – A well-known anti-lockdown Canadian political leader told Fox News’ Tucker Carlson that his recent arrest for breaking COVID-19 rules was a form of “political repression,” and not because he broke health rules.

“In Canada, you cannot speak against the regime. It's like in China. I was in jail for eight hours a day – they handcuffed me, put me in jail and for a non-crime … it was a political repression,” Maxime Bernier, leader People’s Party of Canada (PPC) and former Conservative Party of Canada (CPC) MP and cabinet minister told Carlson on Wednesday.

Carlson responded by saying that “it's remarkable the government would arrest its political opponent for complaining about its policies.”

To this Bernier replied that he is the “only political leader in Canada who is speaking against (lockdowns).”

“So, it is scary that in Canada right now in 2021, you are like in China. Actually, I would always fight for what I believe. And like I said to the policeman, my weapon is my words and I will always use my words to fight for more freedom and a smaller government in Canada. I will be back in Manitoba.”

Last Friday, Bernier’s lawyers from the Justice Centre for Constitutional Freedoms (JCCF) were able to secure his release from prison after he was arrested for breaking COVID-19 health rules by speaking at a freedom rally in a small village in province of Manitoba.

Bernier was handcuffed by Manitoba RCMP and the incident was recorded on video.  His lawyers said the rally had less than 15 people in attendance.

According to a CBC report, Manitoba RCMP said Bernier was charged under the province’s Public Health Act for failing to self-isolate upon arrival in Manitoba, as well as for taking part in an outdoor gathering.

When asked by the officer arresting him whether he had weapons on his person, Bernier replied that he had no weapons and “only my words, only my philosophy, only what I believe in.”

At the time of his arrest, Manitoba had barred all outdoor gatherings. It now allows only 5 people to gather outside, but still has a mandatory 14-day quarantine policy in place for all who visit the province.

Bernier has been a vocal opponent of COVID-19 lockdown measures in Canada. He was recently on a cross-Canada “Mad Max” tour, as he calls it, trying to gain support for the PPC while speaking at anti-lockdown rallies. His tour comes in anticipation of a possible fall federal election in Canada.

Manitoba Premier Brian Pallister warned Bernier before his arrival that should he break the local rules, “he’s going to be light in the pocket book.”

Bernier also spoke recently with Andrew Lawton of True North News. He told him that the PPC is the “only party against these draconian lockdowns.”

“That's crazy that no politician can speak in in a province of our country. It's like being in China,” Bernier said.

Bernier was asked by Lawton why even the Conservative Premiers of Alberta, Manitoba, Ontario, and Saskatchewan have gone along with the lockdown narrative.

“They are following the establishment medical experts and they don't want to have any other point of view,” Bernier told Lawton.

As a former MP for the CPC, Bernier said that Alberta Premier Jason Kenney, whom he used to work with, is now not even recognizable as a “conservative.”

“I was sitting with him around the cabinet table when I was a conservative minister, when he was a minister. He was a real conservative at that time. Now, I don't recognize.”

Bernier also said to Lawton that he does not understand why there are no “provincial parliaments or legislatures” that are opposing lockdowns.

“They're not doing their job… we are in a crazy world,” said Bernier.

Meanwhile Kenney announced that on July 1, Alberta will significantly reduce its COVID-19 restrictions, including the current ban on indoor social gatherings.

This comes in spite of the fact Kenney is the only Canadian premier to have jailed Christian pastors for breaking  COVID rules, having jailed Paster James Coates and Pastor Artur Pawlowski and most recently, Pastor Tim Stephens, who is currently in jail.