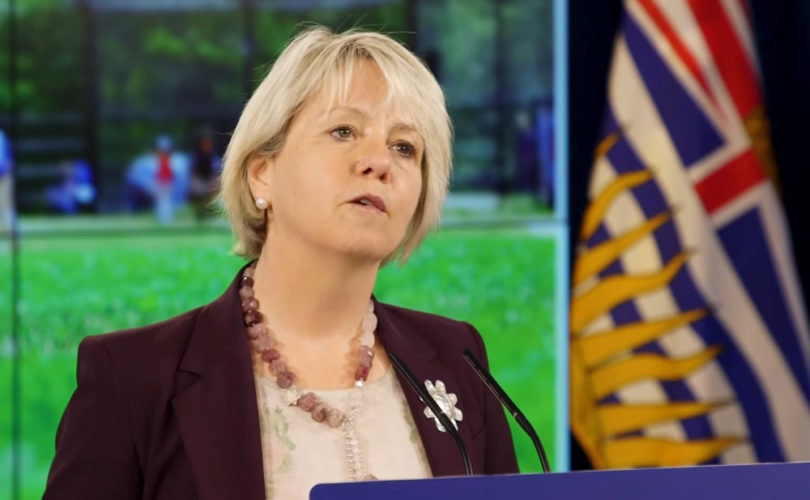 On Tuesday, British Columbia (BC) Provincial Health Officer Dr. Bonnie Henry told the press that children age 5 to 11 are the new targets of the province’s mass vaccination program, encouraging parents with children in that age range to inject their children in early November, when the practice is formally “approved” by Health Canada.

Using a “broad-based approach” to the experimental vaccination of children, Henry told the public in a press briefing that “there [are] about 340,000 children between five and 11 across British Columbia” that need to be vaccinated.

Henry explained that an important part of the plan goes beyond just vaccinating children with the experimental shots, which do not complete clinical trials until 2023, but also ensuring that each child’s medical information is recorded in the province’s “immunization registry.”

Henry said that unlike children 12 years of age and older, BC’s vaccine passport system – which went into effect province-wide in September, and requires residents to show digital proof of vaccination to enter gyms, restaurants, and other “non-essential facilities – will “likely” not apply to younger children, but that the immunization registry for the younger ages is still integral to the mass vaccination plan’s data collection goals.

“The BC Vaccine Card is not meant to be a permanent thing,” Henry stated. But “we know that [the passport] works because it is able to get [personal medical information] on an individual basis.”

Henry also told the press that physicians do not have the ability to input a person’s information into the provincial registry at their offices, so the mass vaccination of children will likely not take place in private practices but instead at specified vaccination locations.

Henry went on to praise physicians in the province, saying “we do know that physicians are really great at giving immunizations to children,” and that “they’ve been a huge part of our mass immunization clinics.”

Henry continued by expressing concerns about remote regions of the province that have low vaccine rates and “high” rates of transmission. According to Henry, they are working on plans to travel to these areas and vaccinate the population en masse.

“We may be able to go in[to] [remote communities] and offer, for example, a booster dose … making sure as well that we offer first and second doses for adults at the same time as being able to offer vaccination for younger children and do a whole community approach,” she said.

Many doctors and medical scientists have decried the practice of vaccinating children against COVID-19, with some warning that doing so will lead to a massive number of casualties and even deaths.

A statement from a team of eminent European medical experts said “vaccination of adolescents for COVID-19 is unnecessary, claims demonstrating efficacy are misleading, and the safety profiles are catastrophic.”

According to Dr. Paul Elias Alexander, an epidemiologist and former senior adviser to COVID pandemic policy in the U.S. Department of Health and Human Services (HHS), “There is zero benefit to children from the vaccine,” and worse, “the potential harm from vaccines is severe.”

“My position is that there must be no mass vaccination of our children, teenagers, and young adults with these vaccines. The vaccine rollout must be stopped immediately,” Alexander stressed.

“We are witnessing this [mass vaccination failure] now with daily reports of adverse effects and deaths due to the temporal links to the vaccines (blood clots, bleeding disorders, myocarditis, and deaths),” he added.

There have been numerous reports in the U.S. Vaccine Adverse Event Reporting System, as well as many scientific studies, that indicate the vaccines are causing an increased risk of heart inflammation conditions such as myocarditis in children and in some cases even causing death.

Citing a “very high-quality paper” by Tracy Hoeg, Dr. Peter McCullough, a world-renowned internist and cardiologist, recently explained that “myocarditis is certainly very real. It’s due to the vaccine. The chances of myocarditis, and hospitalization with myocarditis, for one of these children who is going to be forced into vaccination … is greater than being hospitalized for COVID-19. So it’s much better for the children to not get vaccinated and take the risk of the respiratory infection.”

According to Dr. Alexander, “The risk of severe illness or death from COVID-19 in children is almost nil (statistical zero),” and children are also “at low risk of spreading infection to other children, or spreading it to adults,” making the mass vaccination of children a “catastrophic risk, including, for some, death.”