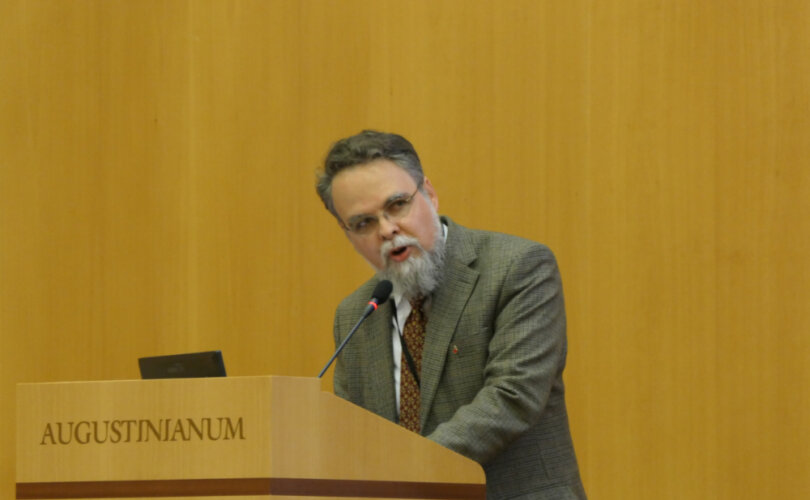 VATICAN CITY (LifeSiteNews) – That there is “no room for discouragement” was the message to participants of the traditional Pax Liturgica conference in Rome on Friday, hours before the Latin Mass “Summorum Pontificum” (Ad Petri Sedem) pilgrimage.

Held in the Patristic Institute Augustinianum in the shadow of the dome of St. Peter’s Basilica, the 7th Pax Liturgica conference gathered together scholars, clerics and devotees – of all ages – of the traditional Mass. The various talks demonstrated both the vitality of the traditional Mass, and the necessity of devotion to it, as speakers warned against blindly obeying the “tyranny” of restrictions on the Mass.

‘No room for discouragement’

Dufourq led the first talk by describing the growth of the traditional movement in Argentina and Spain, as evidenced through walking pilgrimages centered on the traditional Mass.

The growth in the Latin Mass in Argentina has been “enormous” since the promulgation of Summorum Pontificum in 2007, she said. Such growth has been highlighted by a three-day walking pilgrimage, inspired by the famous Paris-Chartres traditional Mass pilgrimage.

Timed around the feast of the Assumption, August 15, the event began 12 years ago with just 10 pilgrims, Dufourq recalled.

Since then, the 100 kilometer trek to the chief Marian shrine in Argentina now includes 1,500 people despite “unhelpful” actions from bishops. Dufourq noted that at this year’s pilgrimage, taking place after the 2021 release of Traditionis Custodes, around 50% of the participants were new, attending for the first time.

Similar scenes are occurring in Spain’s shrine of Covadonga, she added. Now only in its second year, another traditional Massgoer’s walking pilgrimage to Covadonga – from where the Catholic reconquest of Spain began in the early 700’s – has already attracted nearly 1,000 pilgrims.

Given such signs of vitality of the traditional Mass, Dufourq stated that there is “no room for discouragement” about the future of the Mass.

‘Collapse of the liturgy’ leads to ‘crisis of the Church’

Also addressing the conference was Monsignor Nicola Bux, the distinguished priest who formerly served as an advisor to the Congregation (now Dicastery) for the Doctrine of the Faith.

First, echoing Dufourq’s note of encouragement, Bux told the conference that “no obstacle can stop us because the future is ours.” He urged devotees of the traditional Mass to remain “convinced, as we are, that the Lord generates within the Church the energy which is required for rebirth.”

Focussing on Mediator Dei and Summorum Pontificum, Bux outlined the nature of, and remedies to, the “collapse” of the liturgy. Addressing “today’s liturgical issue,” the monsignor stated there was an “unwillingness to acknowledge the fact that the Divine Word became incarnate” and “is manifest in liturgy.”

“Disordered liturgy causes idolatry,” he warned, as it “projects an image of God according to what our own taste is.” On the contrary, “worship is divine if it guarantees the rights of God and those of the faithful.”

Bux added that “ignorance of history leaves some Churchmen to prohibit or judge harmful what Tradition hands down new generations.”

— Article continues below Petition —
Join Bishops in calling out Pope Francis' statement for contradicting the faith
Show Petition Text
5668 have signed the petition.
Let's get to 6000!
Thank you for signing this petition!
Add your signature:
Show Petition Text

But he also outlined ways in which the Church “must establish the principle that the liturgy is sacred.” He called on priests to lead in the process of a “rebirth” of the “sacred,” saying that “rebirth of sacred comes from above and moves the people, and then the people move the clerics.”

“If we support rupture, we are not together with the saints, who always tried with patient charity,” stated Bux. “So let’s not go along with the deification of the Council, as in this way we would deepen the rupture.”

Do not ‘comply with this tyranny’

Warmly received at the event was liturgist Dr. Peter Kwasniewski, who spoke forthrightly about Pope Francis’ restrictions on the traditional liturgy as an “assault on the common good of the people of God.”

Beginning his assessment of the modern liturgy, Kwasniewski described Pope Pius XII’s alterations to the Holy Week ceremonies as presenting a “seriously problematic situation,” and said it was  “not possible” to claim the reforms were “in continuity with the previous.”

The modern process of liturgical “reform did not work rework the Roman Rite, but uprooted it,” the scholar said. “To start by placing the liturgy on an operating table…is to begin with so fundamental an error that one will not be able to avoid a cascade” of ill effects, he added.

Traditionis Custodes was described by Kwasniewski as “a brilliant example of someone sawing off the branch on which he is sitting.”

He urged Catholics to be faithful to the sensus fidei as the “rulers in the Church are abusing their authority.”

“You cannot stand by and comply with this tyranny,” said Kwasniewski.

It is not the Church or bishop that is asking you to renounce what is good, true. It is the prisons guards of treachery, the lavender mafia, who use threats blackmail and bribes….who urge you to grovel for a permission they will eagerly deny.

Such “enemies of Tradition would rather see a dying Church,” the prolific author declared.

“Do not put your own salvation at risk by obeying that which must never be obeyed,” he advised, warning that the certain individuals in the Church “use law as a weapon and obedience as a smokescreen.”