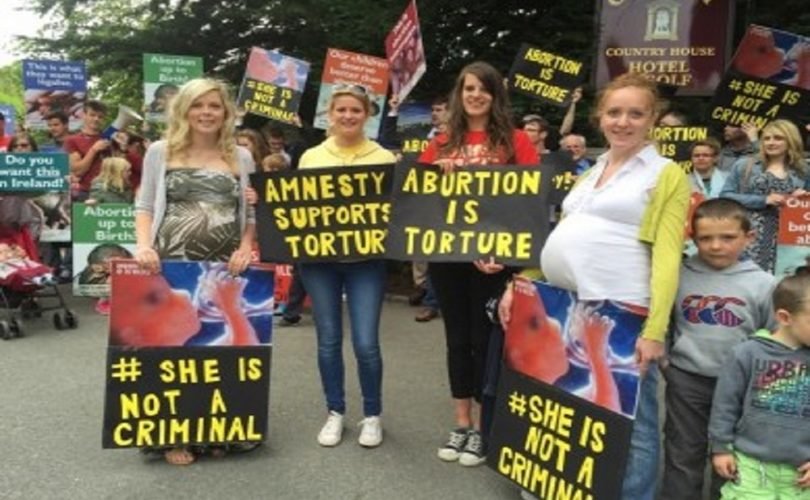 DUBLIN, August 12, 2015 (LifeSiteNews) – A hundred demonstrators, mostly women with babes in arms and carriages flanked by toddlers carrying their own tiny protest signs, greeted Amnesty International (AI) delegates from around the world outside a Dublin hotel with a message the international organization did not want to hear: “Abortion is Torture.”

The delegates, all members of AI's ruling council, had staged their own protest upon arrival, outside the Irish presidential residence, protesting the country's strict abortion law. They claimed that the law is tantamount to torturing women and that it violates international treaties.

“That's a lot of rubbish,” Niamh Uí Bhriain, head of Dublin's Life Institute, told LifeSiteNews. “There is no international treaty that recognizes women as having a right to kill their own unborn children.”

Accustomed to claiming the moral high ground without challenge, AI's top leaders found themselves accused of hypocrisy by protesters chanting, “Abortion is torture” and “Hey, hey, ho, ho, Amnesty International's got to go.”

“You can't claim to be a human rights protector and then campaign [that] the lives of innocent children can be brutally ended,” Bhriain said. “The progressive answer to a crisis pregnancy is to provide support and to help both mother and baby. Abortion is a medieval solution and has no place in a society where human rights are respected.”

“Christians are being beheaded in Syria, and here is AI campaigning in Ireland and El Salvador to bring in abortion on demand while claiming to protect women,” she added. “They've already spent more than a million dollars on a media campaign. They've bought advertising and gathered signatures and are outspending everyone else.”

The Life Institute has gathered signatures, too – 142,000 on the CitizenGo website for a petition reading, “Dear Amnesty International, Stop Pushing Abortion on Ireland and El Salvador.”

Amnesty International, which was founded after the Second World War by a convert to Catholicism named Peter Benensen, was neutral on abortion until 2007, when it declared its support for decriminalization of abortion but not for “abortion as a human right.” The Catholic Church, until then a funder and supporter, severed relations on the grounds that the new policy attacked innocent unborn children.

Irish law makes abortion a criminal offense, but since 2014, the nation exempts cases where a woman's life is at risk, including from suicide. Niamh Uí Bhriain told LifeSiteNews that even the old law (which carried a life sentence) was never used against women, but only against abortionists.

Nonetheless, AI and Planned Parenthood's Irish branches are both spending millions of imported dollars to change the law to allow abortions when a woman's “health” is at risk.

Failing to offer abortion is 'torture,' according to UN report

Amnesty’s campaign is dishonest – and seeks to protect abortionists