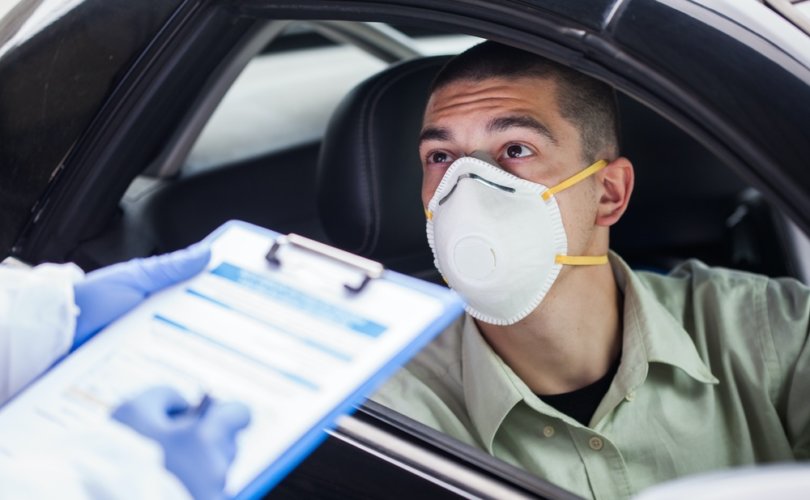 The city of Cleveland with its almost 400,000 inhabitants is part of Cuyahoga County.

Even though County Executive Armond Budish claimed on Friday that he wants people to wear masks “voluntarily,” bare-faced people now risk having the authorities called on them.

After several complaints, or cases of “serious non-compliance,” the Sheriff’s Department could investigate or potentially file charges. Budish also said that local municipalities and police could respond to violations however they see fit, as well. He did not rule out proactive policing, which usually refers to increased visible police presence.

On a political level, in case mask orders are routinely defied within a certain area, the Board of Health could reach out to local authorities to address the problem, according to Health Commissioner Terry Allan.

The online form for filing a complaint asks to “describe your experience, providing as much detail as possible.” Providing an email address, as well as “[a]dditional questions, concerns, and feedback,” is optional.

Republican Ohio Governor Mike DeWine last Wednesday ordered seven counties to have all individuals where facial coverings “[in] any indoor location that is not a residence,” as well as outside, if it is impossible to maintain social distancing of at least six feet. Masks have to be worn also while waiting for and using public transportation.

DeWine exempted certain groups of people from wearing a face mask, for instance the leaders of worship services and people working out in a gym.

While Cuyahoga County in Ohio only recently started asking citizens to report anyone not not following the latest coronavirus orders, Los Angeles Mayor Eric Garcetti did so already over three months ago.

“If any non-essential businesses continue to operate in violation of the stay at home order, we’re going to act to enforce the safer at home order and ensure their compliance,” said Mayor Garcetti.

“We need to make sure that everybody continues to let us know where those folks are,” he added. “If you’ve observed recurring violations of the ‘safer at home’ order, please continue to let us know at Coronavirus.LACity.org/BusinessViolation.”

Garcetti even used the term “snitch” to describe what he was asking of the population.

“You know the old expression about snitches? Well in this case, snitches get rewards,” he said, without specifying what those rewards might be. “We want to thank you for turning folks in and making sure we are all safe.”

The Virginia health department’s website was updated last month to include the option to anonymously report to the state neighbors who exceed the emergency limits on building capacity or refuse to wear masks. The form allows users to specify the “type of establishment” they’re reporting, including “indoor gun range” or “religious service.”

In April, New York Mayor Bill de Blasio’s creation of a tip line, to which New Yorkers were urged to text photos of violations of so-called social distancing rules, backfired. It was flooded with photos of genitalia, obscene hand gestures, de Blasio dropping the Staten Island groundhog (the creature later died of internal injuries), and Hitler memes about how turning neighbors in is the “Reich” thing to do.

Also in April, thanks to the state’s sunshine law, a St. Louis, Missouri radio host obtained the names of residents who’d reported neighbors and businesses for allegedly violating draconian coronavirus lockdown rules. One complainant wrote, “My son and I took a walk yesterday through Heman Park in U City and we saw a number of families playing on the playground equipment. We walked out of the park and up to Olive and saw a number of people playing tennis. Neither activity seemed safe to me.”