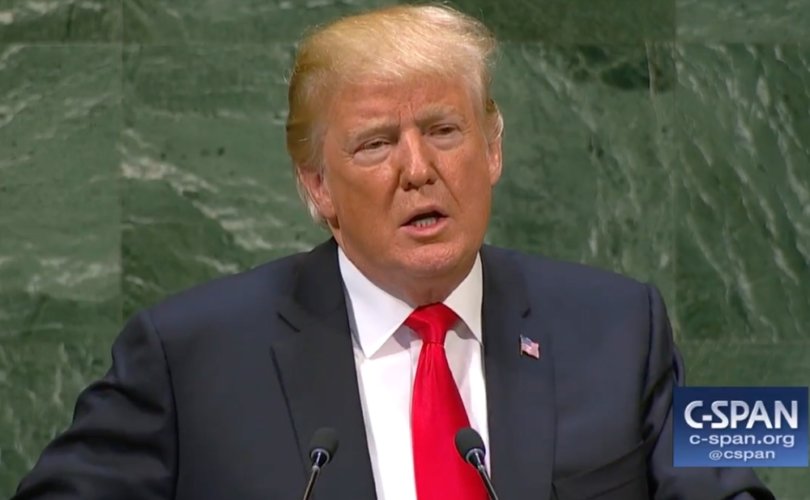 The president opened by touting the U.S. stock market and unemployment numbers under his watch, as well as tax cuts, early development on a border wall, and increased defense spending as evidence of how his administration has “accomplished more than almost any administration in the history of our country.” The claim elicited laughter from delegates, but Trump proceeded unperturbed.

“Standing up for America and the American people” and “standing up for the world” are not mutually exclusive, he argued. “We believe that when nations respect the rights of their neighbors, and defend the interests of their people, they can better work together to secure the blessings of safety, prosperity, and peace.”

America “will always choose independence and cooperation over global governance, control, and domination” because it is just as much the product of “a distinct culture, a rich history, and a people bound together by ties of memory, tradition, and the values” as any other nation, Trump continued.

He affirmed other nations’ right to pursue their own “customs, beliefs, and traditions” without the U.S. “tell[ing] you how to live or work or worship”; “we only ask that you honor our sovereignty in return.”

Trump warned that his “principled realism” means the U.S. “will not be held hostage to old dogmas, discredited ideologies, and so-called experts who have been proven wrong over the years, time and time again,” and that she “will always act in our national interest.”

He went on to cover several topics of international interest, including a case for his controversial renegotiations of trade deals, an optimistic update on peace negotiations with North Korea, and calls for tougher sanctions on Iran.

Trump also stood by his decision to move America’s embassy in Israel to Jerusalem, in recognition of the holy city’s status as the Jewish nation’s capital, and issued a stinging rebuke to the U.N. itself.

“I spoke before this body last year and warned that the U.N. Human Rights Council had become a grave embarrassment to this institution, shielding egregious human rights abusers while bashing America and its many friends,” he recalled. “Our Ambassador to the United Nations, Nikki Haley, laid out a clear agenda for reform, but despite reported and repeated warnings, no action at all was taken.”

“So the United States took the only responsible course: We withdrew from the Human Rights Council, and we will not return until real reform is enacted,” Trump said. “For similar reasons, the United States will provide no support in recognition to the International Criminal Court. As far as America is concerned, the ICC has no jurisdiction, no legitimacy, and no authority.”

Haley announced in June that America would be leaving the so-called “human rights” council, which has promoted abortion and the LGBT agenda. American conservatives have long condemned the body’s inclusion of human rights abusers such as China and Saudi Arabia, as well as its bias against Israel, the Middle East’s only free democracy.

“We will never surrender America’s sovereignty to an unelected, unaccountable, global bureaucracy,” the president declared. “America is governed by Americans. We reject the ideology of globalism, and we embrace the doctrine of patriotism.”

Though not mentioned in this speech, the Trump administration has also worked to oppose abortion and advance religious liberty on the international stage. State Department ambassador Michael Kozak has affirmed that abortion is “not a human right” and that international contraception “access” is a non-issue. USAID adviser Bethany Kozma has called for the UN’s Commission on the Status of Women to recognize abstinence education as a part of family planning.

Meanwhile, Vice President Mike Pence and Secretary of State Mike Pompeo are among the administration officials who have laid out a robust religious freedom agenda, including the creation of a Genocide Recovery and Persecution Response Program to help State and USAID coordinate relief efforts with local faith leaders; an International Religious Freedom Fund to support global religious freedom efforts; and the administration’s pressure on Turkey to release evangelical pastor Andrew Brunson, who has been imprisoned for almost two years.

“Let us come here to this place to stand for our people and their nations, forever strong, forever sovereign, forever just, and forever thankful for the grace and the goodness and the glory of God,” the president concluded.