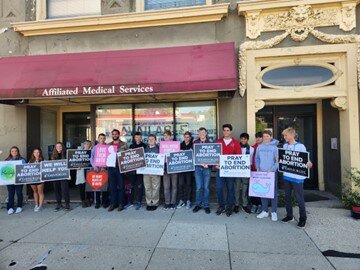 (LifeSiteNews) — Another abortion center in the United States has closed its doors for good after the Supreme Court’s decision to overturn Roe v. Wade in June.

A building belonging to the former Affiliated Medical Services’ abortuary in Milwaukee, Wisconsin, has gone up for sale after providing abortions for three decades.

“No one ever got better by walking through the doors of Affiliated Medical Services (AMS) or any abortion center,” said Dan Miller, the state director of Pro-Life Wisconsin, in an email to LifeSiteNews while expressing joy over the abortion mill’s closure. “They never offered health care, only death to children. No one ever got better there.”

Abortions became illegal on June 24 in Wisconsin after the Supreme Court’s decision returned the state to its 1849 law that strictly prohibits abortions except to save the life of the mother.

“This particular abortion center was a victim of the Dobbs v Jackson case, there is no doubt about it,” Miller continued. “However, the only thing stopping abortionists from killing babies here after Dobbs was a complete ban on abortion penned by our forefathers in 1849, state statute 940.04. It does have a broad and undefined life of the mother exception in it, but this law is the only reason babies in Wisconsin are not being slaughtered at AMS or at the other three Planned Parenthood abortion centers in Milwaukee, Madison and Sheboygan.”

Miller said he has personally spent “over 6,500 hours in front of abortion centers,” and that he has “documented 1,691 babies saved from abortion since August 3, 2010, at Affiliated Medical Services.”

Miller also said that since Pro-Life Wisconsin is “very activist oriented,” they have “put thousands of boots on the ground over the years,” sponsoring and encouraging 40 Days for Life campaigns all through the state. He said the closure of the Affiliated Medical Services abortuary was “an answer to our prayers.”

“News of its closure made my heart sing with great joy,” he told LifeSiteNews. “Prayer is powerful! God does hear our prayers!”

Dennis Christensen, CEO of Affiliated Medical Services, said in an interview with CBS 58 that he did not think he had a future in Wisconsin.

“I think it’s unlikely that our legislature will get its act together to allow abortions in the near future in Wisconsin, and I’m getting on in years,” he said.

While the Milwaukee abortion mill did offer other services to women, such as ultrasounds, it was forced to close its doors for good due to an insignificant amount of traffic after it stopped providing abortions.

“People call and they want to talk to the place where they’re gonna go to have the abortion procedure,” Christensen said. “It wasn’t financially viable to maintain an office just to do (referrals and aftercare).”

“People just aren’t interested in calling a place where they can’t get the service they’re looking for,” he added.

Christensen said he will attempt to open a new abortion mill in Rockford, Illinois, by the new year.

“I’ve basically dedicated my career to providing this service, and I’m not about to sit around and watch that go down the tubes,” Christensen said.

In response to the closure of the Milwaukee clinic, Planned Parenthood issued a statement decrying the state’s “criminal abortion ban” for denying women what they consider to be essential “care.”

“The announcement that Affiliated Medical Services has permanently closed is another reminder of the real harm that is being done by Wisconsin’s criminal abortion ban every day,” the statement read. “Because of this ban, physicians are not allowed to provide abortion care to women who need it, including women experiencing dangerous health conditions related to their pregnancy, women who are victims of rape or incest, or women who have made the personal decision that they are not ready to start or grow their family.”

The Milwaukee abortuary is one of many in the United States forced out of business after the fall of Roe v. Wade. But despite this victory for the pro-life cause, Miller said the pro-life movement still has a long way to go and that pro-lifers must not rest until there are no more loopholes through which babies can still be killed.

“There are about 30 states where abortion is still ‘legal.’ We need to get the word out that outright bans are the only thing that will stop abortion in its tracks,” he said. “Any pro-life law with exceptions for rape, incest or the life of the mother will allow abortions to continue because of the gaping legal loophole for abortion on demand that these three exceptions open up.”

However, while the pro-life movement still has a long road ahead, Miller said there is a distinct message of hope that can be taken from this victory.

“Never give up,” he said. “Persistence is key in winning the battle. And know that God answers prayers. You have to invite God into your battle, because this is a spiritual battle. If you leave God out of the equation, He will do the same. Prayer is powerful!”

“Support your local pregnancy center with money, your time, prayers and support,” he said. “Go to a 40 Days for Life vigil near you. If there isn’t one near you, start one up! ALWAYS VOTE PRO-LIFE, even for the dogcatcher!”