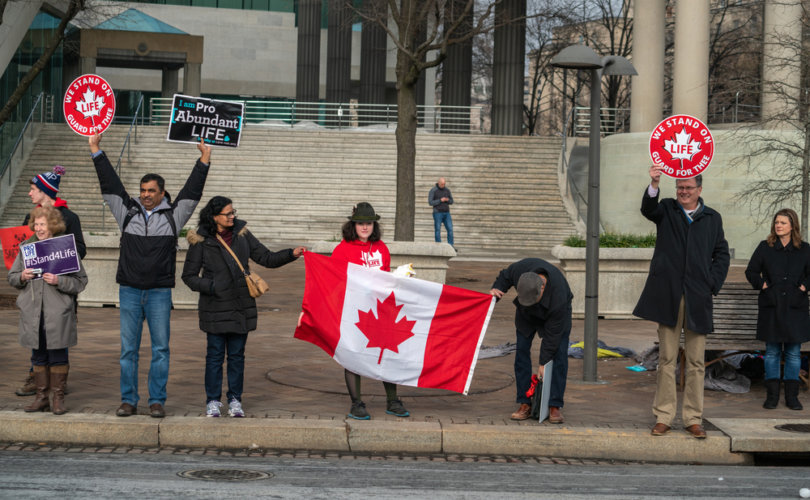 (Campaign Life Coalition) – The Liberal government’s “health care access” proposal (Bill C-3) should be of concern to every pro-life and free speech-loving Canadian.

Bill C-3 is a mini-omnibus bill that combines the promise of ten paid sick days for federal employees with a questionable ban on activities that “interfere” with health care access. It appears the Liberals have resurrected that old, corrupt tactic of presenting two entirely different proposals together – one popular and one controversial – in order to scuttle debate and secure passage of the more controversial matter.

According to Bill C-3: “Every person commits an offence who, without lawful authority, intentionally obstructs or interferes with another person’s lawful access to a place at which health services are provided by a health professional.”

This sounds reasonable on the surface. Physically blocking access to hospitals can jeopardize lives. But is that all the Liberals intend to prohibit? If so, then why a new law, since it is already a crime to intimidate or harass others under our existing laws?

The big question is: What constitutes “interference” in this new proposal? Does it mean counselling an abortion-minded woman on the sidewalk outside a hospital? Could the sidewalk counsellor be charged with “interference” if that woman cancels her appointment with the abortionist? Would the abortionist – who just lost his commission on the killing – not jump at the chance to press charges?

Or could the pregnant woman assert to police that the very act of being shown an anti-abortion message “interfered” with her access to abortion by making her feel “uncomfortable”?

Bill C-3 also states: “Every person commits an offence who engages in any conduct with the intent to provoke a state of fear in… a person in order to impede them from obtaining health services from a health professional.”

Notice that phrase “state of fear.” It is nowhere defined in this bill or in the entire Criminal Code. What does a “state of fear” look like? This concept could certainly be prone to subjective and malleable interpretations.

If peaceful pro-life demonstrators carry signs that show the awful brutality of abortion, would that not qualify as “provoking fear” in onlookers? With messages describing abortion as a crime, a mortal sin, or a human rights abuse, would that not stir up people’s consciences and put the “fear of God” into their souls? We certainly hope so! But will that then be ILLEGAL under Bill C-3? Would not the pro-abortion lobby exploit this new law to persecute pro-lifers?

These are critical questions. After all, the threatened penalty for these new offences is up to TEN YEARS in jail!

All the talk on Parliament Hill and in the media indicates that this Bill is intended to target pro-life protesters, in addition to those who oppose coercive vaccine mandates.

According to a November 26th CTV news article, Bill C-3 is specifically concerned with “health services such as COVID-19 vaccinations or abortion procedures.”

On December 6th, the Liberal Secretary to the Minister of International Trade, MP Arif Virani, said, “we are not just talking about COVID. When we talk about [protecting] the health care apparatus, we have to think about all the health care services that are provided and not just those that address the pandemic. The impacts extend to all those who seek other medical treatments at hospitals and clinics across this country.”

In response to concerns about Bill C-3’s potential impact on Canadians’ freedom of expression and assembly, we are hearing assurances from various Liberal MPs. David Lametti promises: “Canadians who want to express their opinions in a peaceful way will be able to continue to do so.” MP John Aldag claims, “This legislation would clearly ensure Canadians have the freedom to voice their concerns and protest in a safe and peaceful manner.”

But will this apply to pro-lifers? Or will it only apply to labour union protestors, like in the Saskatchewan “bubble zone” law (Bill 48) which suppresses all health care-related demonstrations outside hospitals with the exception of union protests?

MP Arif Virani asserts: “It [Bill C-3] would not capture peaceful demonstrations.” However, in the same breath, Virani also warns, “The right to protest and to dissent is one thing… However, obstructing patients and health care personnel and trying to strike fear into their hearts and minds is something that cannot and should not be tolerated.”

This is our primary concern with Bill C-3. All the promises in the world from every Liberal MP in caucus mean very little if the police and courts begin arresting pro-life demonstrators and sidewalk counsellors simply because the pro-aborts allege we are “interfering” with abortion access or claim we are striking “fear” into abortion-minded women.

Given the politicized state of our current legal system, I have no confidence whatsoever in the Liberals’ promises. I am worried that this new law will very quickly be used as a political weapon to punish pro-lifers and silence our voices in the public square. The fact that Justin Trudeau has pledged to deny charitable status to pro-life charities leaves little room for doubt in my mind that Bill C-3 is designed to target pro-life expression.

And if we are silenced, who is left to speak up for the unborn?

One last item of concern in Bill C-3 is the enormous scope of this legislation.

Unlike typical “bubble zone” laws that we see in various provinces, this Bill C-3 does not specify any limits on its reach. It does not restrict its application to a 50-metre area around hospitals or abortion clinics. In fact, it seemingly turns the entire country into one big “bubble zone” – because it applies everywhere!

Could this result in the prohibition of all pro-life protests – including Canada’s largest annual political protest – the March for Life?

We all agree that true harassment and intimidation are wrong – and the pro-life movement, which defends human life and dignity, does not engage in these dark tactics. However, if pro-life protests get falsely labelled as “interfering” with health care access, or as “provoking a state of fear” in patients, then we could see the end of all pro-life witnessing in Canada. All it would take is one “woke” activist judge to apply this new law to us.

That’s why I am asking you to reach out to your local MP today to express your concerns about Bill C-3. It is possible that this bill could pass into law within days, so it is urgent you speak up now.