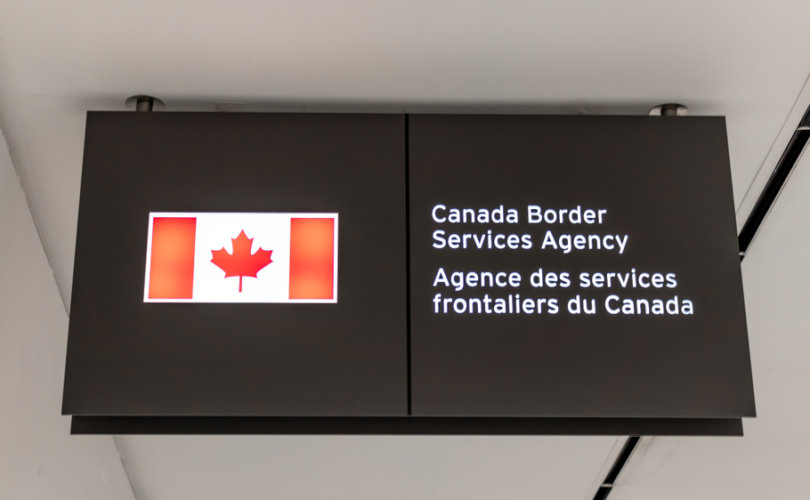 WINDSOR, Ontario (LifeSiteNews) – Upon returning from Florida over the weekend, I was unlawfully detained by the Canadian Border Services Agency (CBSA) in Windsor, Ontario.

The supervisor on staff was so nervous about how me and my family were treated, that after finding out I was a journalist, she said: “The last thing we need is for this to get to the media.”

She also expressed that they could be “suspended” by “the federal government” if they botch their handling of Canadians arriving in the country.

A little background is required.

The staff of LifeSiteNews were invited to partake in our 25th anniversary celebration and annual meeting in Naples, Florida from August 17-19. It can be tricky to get into the U.S. without being jabbed, but not impossible, and many of us found a way.

I will not disclose the specifics of how I entered the country, but it should be noted that unvaccinated foreigners can easily enter the country at most land border crossings.

At any rate, getting into the U.S. was the easy part… it was getting home which was the difficult part.

Vaccine-free Canadians are allowed to re-enter Canada, but are required to either present various proofs of exemption or former infection from COVID, or they are required to quarantine at home for 14 days and asked to submit tests.

I am one of those lucky Canadians who has procured documentation that would have exempt me from quarantine upon returning to the country. I filled out the requisite customs information and even declared my health status through the controversial ArriveCan software.

It should be noted that I did not download the app, which can be used for tracking, but instead filled out the information on a web-browser.

In any event, the wannabe Brown Shirt who I encountered in Windsor did not take kindly to my documentation. He was very agitated with me when I made it clear I was not vaccinated, and immediately began to treat me and my wife and 6-week old baby with visible contempt.

It was about 2 a.m. when we started our sojourn with Trudeau’s vaccine police.

It is the prerogative of a Canadian customs official to be hesitant to accept all documents at face value, which I understand given the nature of border security. However, what is very clear in Canada is that once a customs check has been passed, you are no longer under the authority of the CBSA.

This means that even if the guard believes you should talk to public health, that he has to give you back your documents – including your passport – and that if you decide to go speak with public health, you will have done so willingly.

Canadians have rights, despite how the covidians and the Liberals have acted for two and a half years, and even in these tyrannical times, Canadians who have chosen not to consult public health when re-entering the country have been free to drive away with their passports in hand.

The opposite happened to me.

After we had passed the customs check – no firearms, tobacco, nothing to declare, etc. – we were told, and I quote: “You’re free to leave without your passport.”

I asked the officer if we were being detained, and he made it clear that we were not. He simply reiterated, more than once, that we were “free to leave without” our passports.

It cannot be stressed enough how illegal and egregious this is.

It contravenes the very basics of the rights Canadians have at the border.

Simply put, if you are not being detained for customs reasons, then it is completely unlawful to coerce you to speak with public health by holding your documents hostage.  Again, public health is free to track you down and send you a fine if they so choose, but they have no legal authority to detain you against your will.

My wife and I asked numerous times for our passports back so we could leave, and the man declined to do so over and over.

After we had been coerced to park in the detainment area so that we could have our passports returned, a municipal police officer came to our car and asked for our identification and documents. I told him that I did not have my documents.

Apparently, he did not get the memo that we were being unlawfully detained and did not possess our documents. He looked confused, as he should have, and went back inside to see what was happening.

The reason a cop was there instead of a public health henchman was because it was the middle of the night and public health staff do not work over nights.

Soon after, we were visited by the supervisor who was visibly aghast at what was happening. She tried to diffuse the situation and express that her colleague was just trying to be thorough. In our conversation, I brought up the fact that I was a journalist, and this is where she expressed her apprehension that my encounter with the COVID Brown Shirt be released to the media.

I believe she knew that what was happening was wrong  and that she was simply trying to meander through an impossible situation that her unwise colleague put her through.

— Article continues below Petition —
Support Brave Ottawa Detective, Suspended for Investigating the Truth About Child COVID Vaccines
Show Petition Text
4016 have signed the petition.
Let's get to 5000!
Thank you for signing this petition!
Add your signature:
Show Petition Text

Happy ‘error’ in the system

While I was speaking with the supervisor, the male border guard kept interjecting and trying to stump me, not knowing that I probably understand the legislation better than he does, considering that I critique it for a living.

Showing his level of maturity, he stormed off and slammed a door, yelling in an adolescent fashion: “I cannot deal with these people.”

The supervisor scurried back into the office, no doubt to find a way out of the stupid scenario that officer Brown Shirt had created by circumventing Canadian legal proceedings.

I cannot verify what I will say now, as I was not in the room. But, through the windows, I watched the officers sit down at computers and start to look something up after the supervisor made the media comment and alluded to the fact that I was a journalist.

Could it be that they looked up who I was, and what I did for a living? I will never know.

But I do know, that within a few minutes, the supervisor came out from the office and explained to me that there was an “error in the system” so they couldn’t “scan” my documents, and that it was my “lucky day.” I was then told I was free to go and was not told to quarantine, which I knew I wouldn’t have to because of the documentation I had in my possession.

She also frantically alluded to the fact that I was a journalist again. “You’re a journalist” she said, before she proceeded to tell me I could call a hotline before travelling back into the country again.

Sadly, officer Brown Shirt didn’t come to see us off.

It may not be the last time that officer Brown Shirt has to deal with me, however, as I have submitted my complaint to the CBSA, and am waiting for next steps.

Lastly, after all the hassle we were put through, and after we were cleared by the supervisor to go home and live our lives, I received an email from public health this morning telling me to quarantine for two weeks.

It is not required for people who have valid documentation like I do to quarantine, so I will be ignoring that email. But, what a dumpster-fire of an organization the CBSA has become under Trudeau.

Not only do they act illegally, but they cannot even communicate properly.